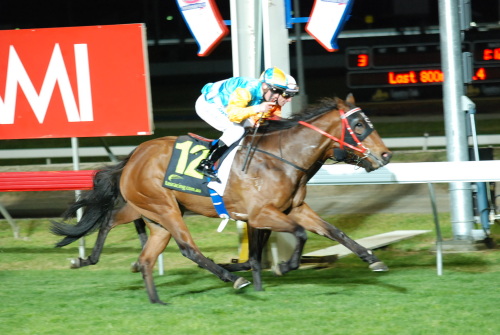 YOUNG Melbourne based apprentice Jason Maskiell notched his first Tasmanian win of the season aboard his Shim Sham Shimmy at The TOTE Racing Centre on Thursday night.

“He ran well last start but he is very raw and doesn’t know what he is doing yet. He is a lot like his sister Tough Tapper” Maskiell said.

Jumping from the outside barrier was ideal for Maskiell as he was able to get the three-year-old to settle in his preferred position.

“He can’t be near other horses as he is petrified of being inside them. The best thing was the outside gate”.

“I wanted to be deep otherwise he wouldn’t let down. It didn’t worry me if I was going to be three deep without cover, the best thing was he was able to get in behind them and relax”.

“I think you will see the real Shim Sham Shimmy next prep” Maskiell said.

Maskiell’s last victory in Tasmania was aboard Stadacona for John Blacker in the $30,000 Tasmanian St Leger at the final night race meeting of last season.