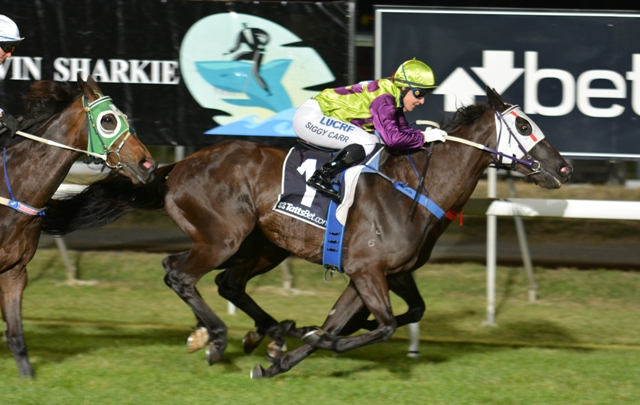 When Geegees Blackflash arrives at the starting stalls for tomorrow’s $225,000 Group 3 Betfair Launceston Cup his rider, apprentice Siggy Carr, will be carrying the hopes of thousands of the horse’s fans across the nation.

That’s a big responsibility for any rider let alone an apprentice but if anyone can handle the pressure it is this pint-sized dynamo of a rider who has taken her craft to a new level since relocating to South Australia last year to further her career.

She guided the John Luttrell-trained gelding to victory in the Betfair Hobart Cup 15 days ago and if that wasn’t enough she also partnered Geegees Goldengirl to a convincing win in the Strutt Stakes (2100m).

Geegees Goldengirl went on to win the Tasmanian Oaks last Sunday with Carr again in the saddle.

One thing Carr has learnt during her short time as a jockey is how to deal with the pressure of big races.

Carr has been riding horses since she was five and with her father Royston, one of Tasmania’s most respected horsemen, she was destined for a career in the saddle if she so desired.

She has been associated with some handy horses since she was first licensed but none of the caliber of “The Flash”.

Geegees Blackflash’s trainer John Luttrell has been bombarded with media inquiries this past week and no doubt he will be looking to hire a media manager if his stable star emerges triumphant tomorrow.

“Dealing with the media is just part and parcel of training but it gets especially hectic when you have Geegees Blackflash in your care,” Luttrell said.

“The horse doesn’t seem to mind all the attention; in fact I think he’s starting to enjoy all the fuss.”

“The horse is in great shape and I could not have him in better shape for tomorrow’s race.”

“His track-work has been as sharp as ever since winning the Hobart Cup and he hasn’t had his head out of the feed bin,” he said.

Should he win tomorrow the big black horse will become the first horse since the great Brallos to win two Hobart and Launceston Cups.

Despite having never ventured out of the state his fan based stretches across Australia.

The gelding’s owners Paul and Elizabeth Geard have enjoyed their best Betfair Tasmanian Summer Racing Carnival having won seven feature races so far but success in the Betfair Launceston Cup would be the absolute icing on the cake for their thoroughbred racing and breeding enterprise.