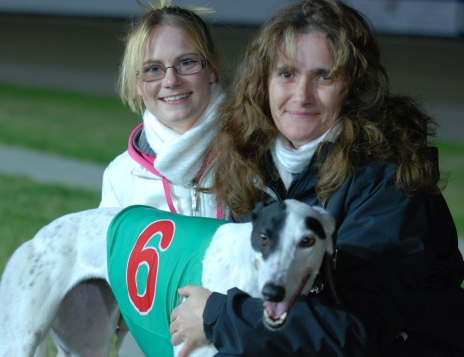 CLASSY bitch Silent Giggle might not be the best of the quickest chaser in Tasmania but to her trainer Loretta Luttrell she is a real star.

In Hobart last week the talented bitch produced another impressive performance to win her division two heat of the TGOTBA series over 461 metres.

She began well from box six and pushed her way down to the fence to land behind the leader Dermie that flew the lids from box one.

Silent Giggle eased off the leader’s heels near the home-turn to challenge and while Dermie refused to wilt in the home straight Luttrell’s bitch proved too strong on the line to score by a half-length with Soliloquy a distant third.

“Every trainer deserves the chance to have one as honest as this bitch,” Luttrell said.

“She has loads of ability but she also is a pleasure to have around the kennel and she has such a wonderful nature,” she said.

Silent Giggle is a recent winner of the Vets Medley series proving her versatility over the sprint and middle distances.

“The plan was to freshen her up for this series and I think she showed that tonight when she didn’t draw clear of the runner-up that has plenty of ability,” Luttrell said.

“But we will push on to try her over the longer distance with the national Distance Championship in mind,” she said.

While Silent Giggle showed her class there was no more impressive division two heat winner than Speed Direct that produced a best of night run of 26.01s.

Speed Direct, prepared by Ted Medhurst, made it five wins in succession when he powered his way to a five-length win over Magic Moss with Agent Bluey 2-1/2 lengths astern.

It was an awesome display by the speedster that has notched seven wins from 10 starts and looks set for a big future.

The Brendan Pursell-trained Gatty Com showed he will be a force in the division two final with a sensational win in his heat clocking a slick 26.11.

Gatty Com showed great early speed to lead from box six and had 1-1/2 lengths to spare over Jennifer Allen on the line with Disney Bound rattling home from well back to grab third over two lengths astern.

Intense Suspense was probably the most impressive of the five division two heat winners.

The Rod Ransley-trained dog began well from box eight and ran in a straight line to the top turn before crossing down to be three-wide in a line of three turning for home.

But when he slipped into overdrive he quickly put three lengths on his rivals and went on to score by almost six lengths from Classic Camdale with race leader Ripple Effect about two lengths away third.

The Margaret Rossendell-trained Franklin Bluboy had no trouble in winning his heat, leading all the way to score by almost two lengths from the fast-finishing Beaudine with Black Jade hanging on for third.

Franklin Bluboy stopped the clock at 26.28 but would probably struggle to place if he runs that time in the final.