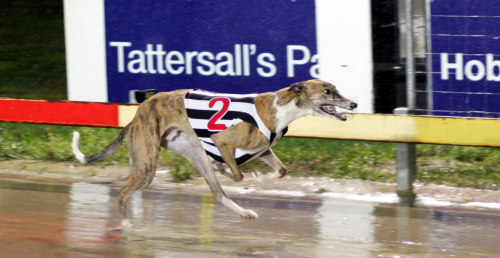 Evergreen sprinter Eagle Eye secured his berth in the final with an impressive win in his heat.

The Butch Deverell-trained dog bounced straight to the front from box three and his first split of 5.06 set up the win that was expected by punters who backed him in to start the $2.90 favourite.

He sped clear of his rivals and while Super Joe Cool and Pure Thirst tried hard, Eagle Eye had too big a break.

Sandhog missed the start and was a clear last turning fore homer railed through and hit the line hard to suggest he could be a chance if he steps cleanly from box six in the final.

Mercury Morris made full use of the inside box to jump and lead all the way in his heat.

The Gary Fahey-trained dog loves an inside draw but he will have to be on his best behaviour in the boxes in the final if he is to win carrying the blue vest.

He went on to score by over six lengths from Akka Boy with Perfect Socks third, just in advance of Topline Doovee.

Eagle Eye has drawn box two in this Thursday night’s final with Topline Doovee on his inside.

If Topline Doovee can fly the lids and get clear early she is the one to beat but her record of late suggests she might be a light of other days.

However, her kennel mate Super Joe Cool is a rising star with plenty to offer from box three.