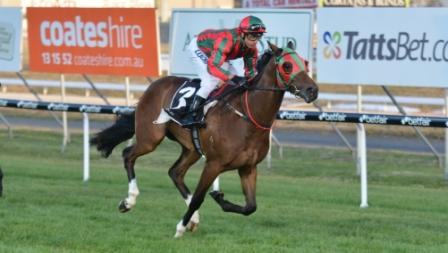 CONSISTENT two-year-old Siorca will be aimed at all the feature juvenile races during the 2015 Betfair Tasmanian Summer Racing Carnival following his maiden win under lights at The TOTE Racing Centre in Launceston last night.

It was the Sharkbite gelding’s fourth start but he had shown talent from the outset by being laced in all of his three previous outings.

“He was impressive tonight and showed a liking for this big Mowbray track so will definitely progress to the feature two-year-old races and probably the ($100,000) Gold Sovereign here at Mowbray to be his grand final,” Campbell said.

Siorca was bred by Alwyn “Ace” Shaw at is Aceland Stud from one of his high quality broodmares Chrome Magic that was a multiple winner in Victoria.

McCoull was pleased with Siorca’s performance and concurred with Campbell’s view of where the gelding will be aimed during the carnival.