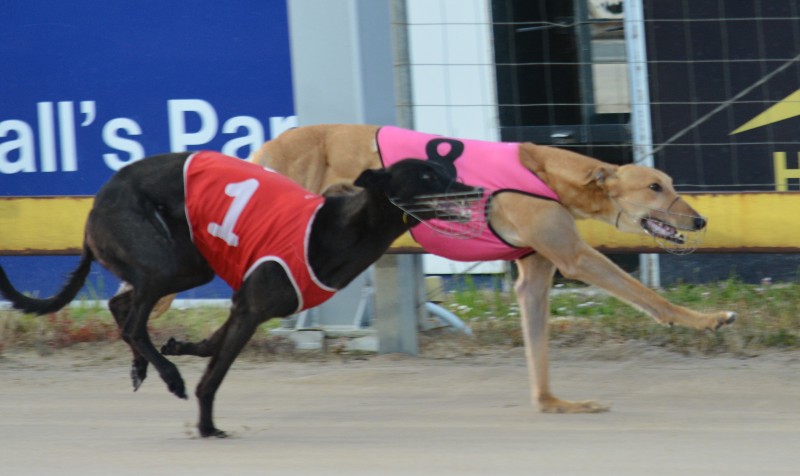 They will tackle the event that includes some of the best chasers in Australia including recent Melbourne Cup winner Dyna Villa and former New Zealand star Above All that produced the run of the night to secure his spot in the rich final that offers $75,000 to the winner.

The Gary Johnson-trained Senor Slamma won his way to the final by taking out the first of eight heats then Hellyeah Bolt and Breaker’s Tip capped off a reasonable night for the local brigade.

Senor Slamma ($2.80) was fairly away from box eight but mustered speed quickly to clear the field and dive down to the rails to lead from Victorian  Hekate Belle which was backed into favouritism ($2.30).

Turning for home Senor Slamma kicked clear and then had enough in reserve to stave off a determined effort from the favourite over the final 80 metres scoring by a nose with Bit Hot Rusty a game third almost three lengths away.

Senor Slamma stopped the clock at 26.23 and while that was a fair way off the best of the eight heat winners it was how he went about winning that will encourage punters to follow him in the final.

His trainer hasn’t always had eyes on the Hobart Thousand with the son of El Grand Senor.

“I bought this dog from Melbourne and after he ran last at his first start for me at Devonport I thought – what have I done here,” Johnson said.

“But he has gradually come good and to win 10 of his past 11 starts is a top effort and only good dogs can do that.”

“He deserves his place in the Thousand final and while he will be u against some of the best in Australia I’m sure he’ll do us proud,” Johnson said.

Tasmania’s star performer on the national stage Buckle Up Wes missed a berth in the final but at least he was beaten by another talented Tasmanian sprinter in Hellyeah Bolt from the Anthony Bullock kennel.

Buckle Up Wes ($1.50) flew the lids from box one and led Hellyeah Bolt ($6.70) clearly to the top turn but Bullock’s kennel star cruised alongside the recent Australian Cup and Topgun winner and went on to defeat that dog by almost a length with Underclass Hero over three lengths away third.

Bullock was thrilled with the win and is confident his kennel star is capable of bettering the time of 25.96 that he clocked in winning his heat.

“To race outside of Buckle Up Wes and go on and beat him on his merits says a lot about how good this run was,” Bullock said.

“There has never been a lot between these two dogs but tonight mine was at the top of his game and it is probably a shame that we weren’t in separate heats because they both deserved to be in the final.”

“This is as good as it gets for us here in Tasmania to have one in a Hobart Thousand final – its what we all strive for,” ‘Bullock said.

Breaker’s Tip produced a courageous effort to make his way to the final by coming from behind to defeat another local Janda and Victorian invader White Spyro that dead-heated for second almost two lengths from the winner.

Breaker’s Tip ($8.80) is from an outstanding litter bred by Greg Fahey and trained by his brother Gary Fahey.

He was only fairly away from box one while Victorian dog White Spyro flew the lids with local hope Janda that shared the lead to the home turn.

The pair powered up the home straight but it was Breaker’s Tip that emerged over the final 50 metres to get up and score by almost two lengths from Janda and White Spyro that dead-heated for second.

His time was 26.35 which was the slowest of the eight heat winners but he is capable of better.

Reigning Melbourne Cup winner Dyna Villa had no trouble making his way to the final.

The Jenny Hunt-trained son of Collision flew the lids from box four and gave his rivals a good look at his hind quarters throughout the 461-metre trip.

Dyna Villa is boarding with top Tasmanian trainer Susan Gittus who is a good friend of the trainer’s family.

“I know Jenny (Hunt) is pleased with how the dog is going after his Melbourne Cup win,” Gittus said.

“He trialled solo last week and produced handy times but he’s improved on each of his splits tonight and no doubt he is capable of improving on that in next week’s final.”

“He is a very talented dog that is good from any box draw because of his manners and should he find the lead in the final he will be very hard to beat,” she said.

The fastest time of the eight heat winners belonged to the Steve Clarke-trained Big Ticket that led throughout and stopped the clock at 25.90.

His first split was a fair 5.12 but it was his second split of 10.95 that set him apart from the rest as he was the only heat winner to break 11 seconds for that split and his run home was as strong as any.

The Darren McDonald-trained Kicking Rocks tried valiantly to haul in the leader over the concluding stages but it was to no avail and he had to settle for second just under a length from the winner.

Big Ticket is the youngest and most inexperienced of the finalists as he has just turn two and has had only 13 starts but he has won eight times and has missed a place only twice.

The Hobart Thousand final will be clearly his biggest test but his times suggest he will be very competitive.

Above All, a former star New Zealand dog now in the care of Robert Britton, produced the run of the night to make it to the final.

Above All ($1.20) missed the start badly from box four and settled last but mustered speed quickly but he then ran into the back of the field and had to steady before finding his way to third rounding the home turn.

Winsome Tommy kicked clear on the home turn with Wynburn Rush in pursuit but when Above All caught sight of the lure he ranged up to the leaders and went on to defeat Wynburn Rush by 3-1/4 lengths with Winsome Tommy just under a length astern.

The Robert Britton-trained dog won and The Meadows before winning his heat of the Melbourne Cup and then ran a creditable fourth to Dyna Villa in the final.

Britain sent the dog to Tasmania for a solo trial and he was the quickest of three that included Dyna Villa.

In winning his Thousand heat he stopped the clock at 26.16 but it was irrelevant given where he had to come from to win the heat.

Another impressive heat winner was Ride The Rails that gave his trainer Kelly Bravo two into the Group 1 final.

Blurred Vision was Bravo’s first to secure a berth in the final but his unimpeded time of 26.23 would suggest he might struggle in the final.

But Ride The Rails had to overcome missing the start to get up and win his heat clocking a handy 26.05 on his way to defeating Night Tremors by almost five lengths.