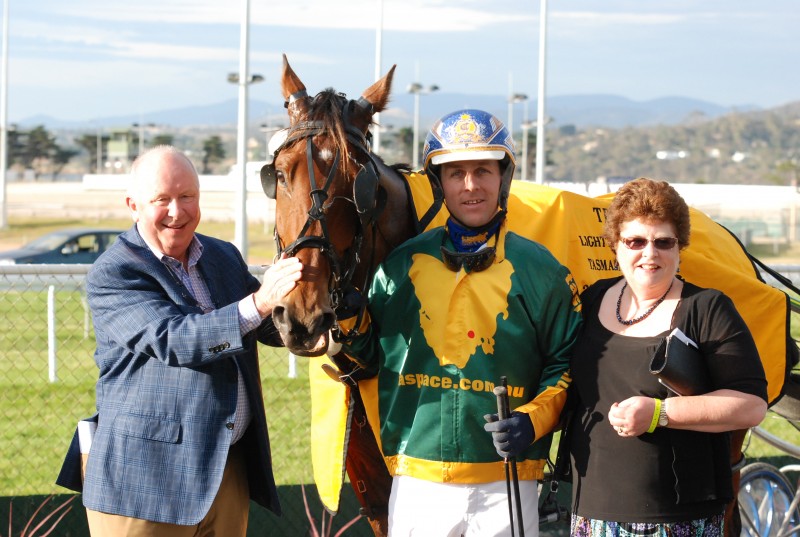 MOST PUNDITS are predicting the harness racing Easter Cup at The TOTE Racing Centre in Launceston tonight to be a match between the two back markers off 40 metres in last year’s winner Motu Crusader and  this season’s best performed pacer Star Chamber.

But a spanner has been thrown into the works with both horses requiring a change of driver for the Launceston Pacing Club’s premier event that carries prizemoney of $40,000.

Motu Crusader was driven to victory in last week’s heat by Gavin Lang but he is required to partner the Adam Kelly-trained Outrageous El while Star Chamber will be without regular reinsman Nathan Ford who was suspended last week and he is relaced by Nathan Jack.

Lang has been replaced by Grant Campbell who is no stranger to partnering this evergreen gelding.

Campbell guided Motu Crusader to victory in last year’s Easter Cup but he has driven the Zeke Slater-trained gelding many times.

Jack takes over the reins aboard arguably Tasmania’s best pacer in Star Chamber that has done a remarkable job to win the $40,000 Tasmania Cup, $20,000 Hobart pacing Cup and just recently the $25,000 Devonport Cup.

Victory in the Easter Cup would give the gelding the Tasmanian Grand Slam of harness racing.

With no markets yet framed for the event, corporate bookmakers should settle on either Motu Crusader, Star Chamber or Victorian heat winner Rule Like A King.

The Easter Cup is a time-honoured event having been established in 1917 and boasts wins by many former champions.

It was held at the old Elphin Showground until 1987 when the TOTE Racing Centre at Mowbray was opened and in the first few years at that venue the race was won by Inter-Dominion class pacers Quite Famous, My Lightning Blue, Thorate, Another Bart, Franco Tiger and the great Tasmanian free-for-aller Halyer.

Motu Crusader proved he can join that elite group by the way he won his heat last week, although his trainer said two weeks prior to that effort he would not have given his stable star much hope of making it consecutive wins.

“If you had asked me 10 days before last week’s heat if I though he could win it again I would have said no but after his heat win I knew he was back to where he needs to be to win this race,” Slater said.

Motu Crusader had close to six months away from racing last season due to a hoof injury and last week’s effort was his fourth run back from that spell.

“The horse has had feet issues all of his life but that’s the beauty of training at Seven Mile Beach.”

“It has just been a matter of getting him race fit and to be honest I couldn’t be happier with him going into this race,” he said.