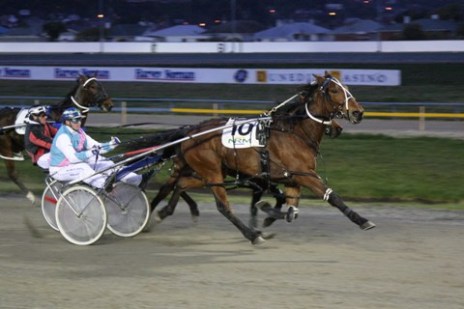 TALENTED young harness racing trainer Zeke Slater has made a rapid rise in the training ranks since he returned toTasmaniaafter a stint inQueenslandabout two years ago.

Slater enjoyed a lot of success in feature races with quality mare Queen of Fire and when that mare was returned to her owner Merv Butterworth she was replaced with Greysteel and he has been a revelation in top grade of late winning his past three and taking the scalps of the best Tasmania has to offer.

But the news gets better by the day for Slater who today took delivery of Motu Crusader, also owned by Butterworth that has been winning and placing against the top grand circuit performers inQueenslandof late.

Motu Crusader won the $60,000 Sunshine Sprint over 1660 metres at Albion Park in late July defeating Smokin Up and Terrorway that are considered the best in the land and Washakie that won his fourth Truer Memorial in succession last week also finished behind Motu Crusader in the Sunshine Sprint

Motu Crusader arrived safe and sound this morning and according to Slater the horse took no harm from the trip acrossBass Straitlast night.

The New Zealand-bred gelding has had 34 starts inAustraliafor 14 wins and eight minor placings for $184,000 in stakes.

Listen to what trainer Zeke Slater had to say (yesterday) about the arrival of Motu Crusader – click here.