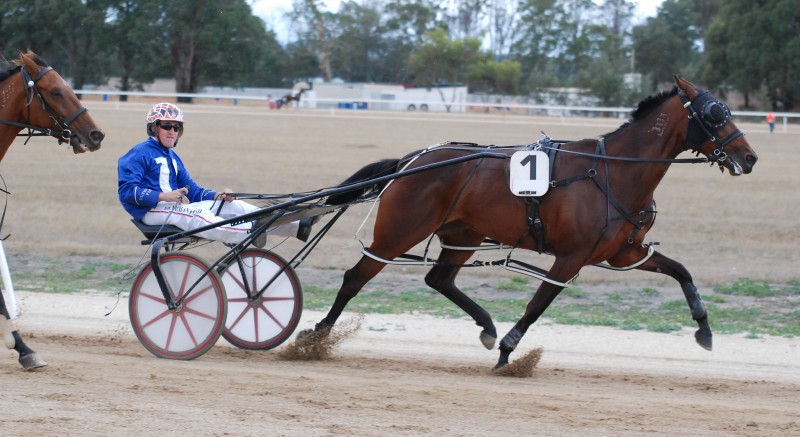 HARNESS racing trainer Zeke Slater is rapidly earning a reputation as the “Cups King” with the most recent addition to his stable Stone Skipper scoring an impressive all-the-way win in the Westbury Cup at Carrick yesterday.

Stone Skipper was having her fourth start for Slater but she went into the race with decent form at her most previous outing when she faced the breeze but still ran on gamely to finish second to Came Rollin In at Tattersall’s Park in Hobart.

Stone Skipper stepped brilliantly from the standing start and had no trouble holding the lead to the first turn.

From there on in it was a procession and when Ford called on the five-year-old mare for the big effort in the home straight she found plenty and went on to defeat Matesforever by 2-1/2 metres with Chassys Best seven metres away third in what was a blanket finish for the minor placings.

Slater said Stone Skipper (BettorsDelight-CamRiver) was a welcome addition to his stable.

“She’s always been a good mare – she’s well bred and I think she cost a fair bit of money,” Slater said.

Stone Skipper is owned in part by Victorian-based motor car racing identity Gary Rogers who races her in partnership with talented reinsman Nathan Ford who guided the mare to victory yesterday.

Slater is hoping his winning run in cups can continue at the end of the month in the $40,000 Easter Cup in Launceston on Easter Sunday but not with Stone Skipper.

“I thought I was a bit stiff not to win last year’s Easter Cup with Queen Of Fire but I’m hoping to make amends this year with Greysteel,” Slater said.