Slater’s mare on the money 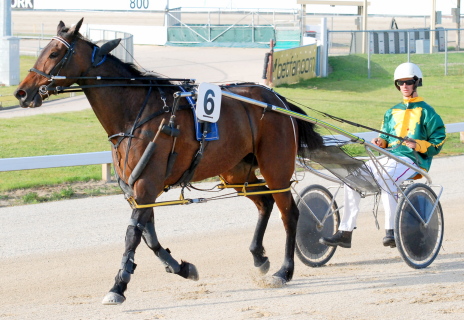 Slater drove his promising mare Sambrosie Lass to victory in the Limelite Media pace over 2090 metres and followed up in the next rare with a masterful drive to win aboard the Ben Yole-trained Coruba Run.

It was almost a treble when recent arrival at his stable Greysteel led and was run down by Beautide in track record time in the Light Harness Tasmania Free-For-All over 2090 metres.

Sambrosie Lass (Armbro Operative-Eva Tereva) has been consistent of late with this latest win her second in the space of three starts with a second at her previous outing splitting the wins.

Slater’s mare was heavily backed late in betting to start favourite at $2.90 while Margin Girl drifted from $2.30 to start the second elect at $3.20.

Margin Girl (Rodney Ashwood) urged his mare early to find the lead while the heavily backed Miss Peru ($3.90) galloped at the start from the pole position and lost all chance when driver Kate McLeod was unable to get the mare back into her gait quickly enough.

Slater sent Sambrosie Lass around the field to face the breeze and when he called on his charge for the supreme effort in the home straight she knuckled down to the task and hit the line with a clear margin over the race leader.

Listen to what trainer-driver Zeke Slater had to say about Sambrosie Lass’s win – click here.