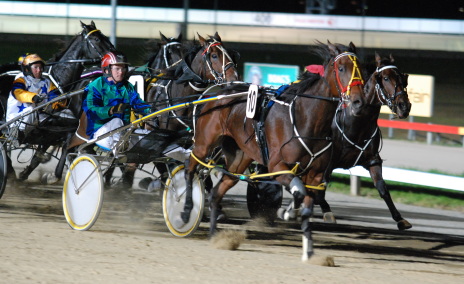 CLASSY harness racing mare Queen Of Fire confirmed her status as Tasmania’s best free-for-aller when she came from well back in the field to score an emphatic win in the Brighton Cup over 2090 metres at Tattersall’s Park in Hobart last night.,

Queen Of Fire won three in succession before falling victim of circumstances in the $40,000 Easter Cup in Launceston two weeks ago.

But allowed to be driven back in the field last night she enjoyed a cosy run, emerging three-wide withy cover for the last lap before peeling off their backs at the top of the straight.

The six-year-old powered home to defeat archrival Our Sir Jeckyl, that came from near last on the turn, with Empty Envelope poking through to grab third in a bunched finish for the minor prize.

It was the mare’s fourth win in her past five starts and her trainer and owner Zeke Slater is now eyeing off a $100,000 mare’s race in Melbourne at the end of next month.

Despite her brilliant form going into the race and still with the services of top reinsman Gareth Rattray in the cart, it appears punters were somewhat unforgiving of her effort in the Easter Cup and let her go around last night at the incredible price of $11.

Gamblers Rustler was heavily backed to start the $2.50 favourite ahead of Our Sir Jeckyl ($3.90) with Empty Envelope next best at $8.60 courtesy of him starting from the pole position.

Gamblers Rustler (Rohan Hillier) led from gate three and set a solid tempo while Empty Envelope had the run of the race on the leader’s back.

But after being taken on twice in the run, the favourite weakened near the home turn allowing Aapennon, that had faced the breeze for much of the race, to forge to the lead but he was swamped half-way up the home straight.

Listen to what trainer Zeke Slater had to say about Queen Of Fire’s lastest triumph – click here.