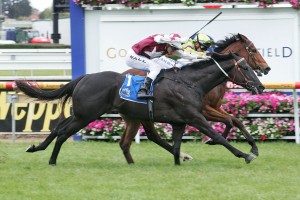 THE Carbine Club Stakes for three-year-olds is always a keenly contested event on Tasmanian Derby Day and this Saturday’s race should be no exception.

But this year’s event could have something special in the form of a three-year-old colt name DarkValley that resumes from a lengthy spell.

Dark Valley (x Bel Esprit) had only one start back in October 2009 for a win over subsequent Golden Slipper winner Crystal Lily in the Listed Debutante Stakes (1000m) at Caulfield.

The colt was prepared by Darren Weir who had expected to head him towards the Golden Slipper.

Unfortunately he suffered a minor pelvic injury that resulted in an enforced 12-month lay-off.

Spreyton trainer Dean Wells is friends with a couple of the colt’s owners who decided to send the three-year-old to Tasmania for a few preliminary runs before returning to Victoria for hopefully another tilt at Group glory.

Listen to what trainer Dean Wells had to say about DarkValley – click here .