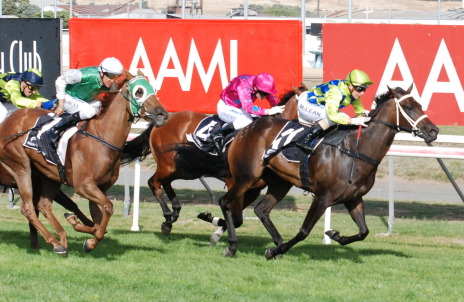 EXCITING three-year-old filly Bel Price will be out of action for up to 10 months as a result of knee problems.

The Vicki Rhind-trained three-year-old was being hailed a potential superstar after her impressive win in the Veolia Environmental Services 3YO Classic over 1200 metres in Launceston last Wednesday .

That win took her career record to two wins and three placings from only six starts but she was a good thing beaten in two of the races in which she had to settle for a minor placing.

The celebrations of her latest win had hardly subsided when the trainer noticed the filly was not quite stepping out as normal the day after her latest victory.

“She was a little bit scratchy in the front legs on Thursday morning so instead of rushing her straight off to Melbourne for assessment I sent her to Longford on Friday for X-rays and that showed us she has problems with bone movement in both knees,” Rhind said.

“There are no chips or fragments but there is enough bone movement that warrants an operation for both knees.”

“She’ll be sent straight to Caulfield where Dr Alistair McLean will operate and do all the necessary clean-up work and that will lead to the filly requiring at least six months off,” Rhind said.

Bel Price is owned in Victoria by one of Rhind’s most loyal owners Graeme Gathercole.

“We realised fore sure last Wednesday that this filly was quite special and that’s very evident now because she has won the race on sheer ability.”

Bel Price is b y Bel Esprit from the Keltrice mare Kel Price and Rhind said she has always been mindful that the dam had leg problems.

“She is by Bel Esprit from a Keltrice mare so the writing was on the wall that she was going to have chalky bones, so we are always going to keep a close eye on her because her mother (Kel Price) had knee issues,” she said.

While Rhind and the filly’s owner are very disappointed they are thankful the issue was detected early.

“It’s natural to feel disappointed because we know she is special and we had our eyes on Melbourne in the coming weeks but reality of it is that we look after her now and we should have her later.”

“If everything goes to plan we should have the filly back racing in about 10 months,” Rhind said.