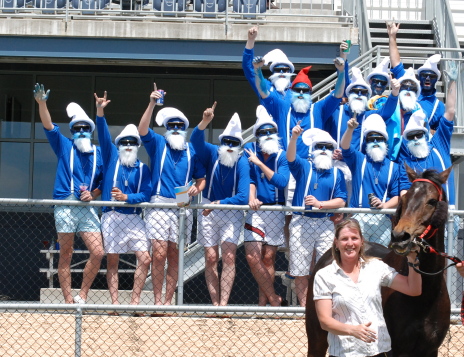 12907802_11121222_006SHOWING The Faith proved he may have what it takes to progress to some of the minor cups in the New Year with a gutsy win in a benchmark 78 handicap over 2100 metres at Tattersall’s Park in Hobart yesterday.

The Harriet Paul-trained six-year-old showed he was nearing his best form at his previous start when third to Colossus Of Rhodes in Launceston.

With in-form apprentice Rasit Yetimova aboard the gelding settled well to be just off the pace at the half-way mark and turning for home he had the leader in his sights.

When Yetimova called on the gelded son of Keep The Faith for the big effort he burst clear and then showed great courage to stave off all challenges over the final 300 metres.

It was a game effort and one appreciated by a group of horse racing fans from Canberra, and various parts of Victoria who had ventured to Elwick for a bucks party and they were all dressed in Smurf costumes,including the blue face paint.

Matthew Hawkey from Canberra will be married next Saturday and when his mates contemplated a venue for the bucks party they opted for Tasmania as a few of the lads had enjoyed their time when last in the state.

The Smurf boys got lucky as they pooled their money and snared the quadrella that paid $4001.

Showing the Faith won the third leg of the quadrella, much to the delight of the Smurf crew.

He has always shown staying potential and Paul is very keen to target some of the minor cups.

Listen to what trainer Harriet Paul had to say about Showing The Faith’s latest win – click here.