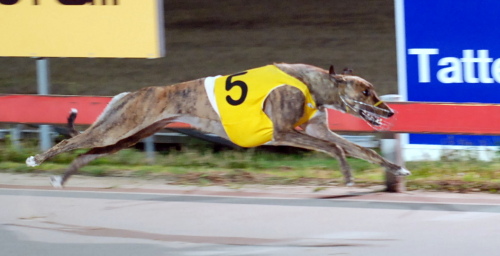 PROMISING greyhound Sonny’s Brindle continued on his winning way at Devonport on Tuesday with an emphatic victory in a heat of the Rapidvite Tasmanian Country Derby over 452m.

It followed an equally emphatic victory in a juvenile at Tattersall’s Park in Hobart last Thursday week in which he clocked a slick 26.14 over the 461-metre trip.

Sonny’s Brindle, prepared by Joey Sherriff at Lilydale in the north of the state, has produced sensational times for a young dog and while he is not fashionably bred, his sir, Our Spence, may have a future at stud in Victoria.

Our Spence (x Awesome Assassin) won a West Australian Young Star Classic by 11 lengths and went on to win a SA Derby as well as making the finals of two major Victorian provincial cups.

Sonny’s Brindle possesses brilliant early speed, something he has inherited from his sire.

He was not only the fastest of the three Country Derby heat winners his time of 25.66 was the best of the day on the 10-event card.

The Debbie Cannan-trained Regent Typhoon caused an upset in winning his Country Derby heat over the well-backed favourite Thirteen Black.

Regent Typhoon had almost a length to spare over Thirteen Black with Crowie Lamar 1-3/4 lengths astern.

Macey’s Dream, prepared at Leith by Garry Johnson, also impressed with his heat win over Adventurous in a time of 25.86.

The dog was coming off a third to Sonny’s Brindle in Hobart on April 22.

The Betfair Country Oaks heats also were held at Devonport with the in-form Perfect Sox likely to start one of the favourites in the final, especially is she draws close to the rail.

Sultan’s Swing from the Debbie Cannan kennel was the fastest heat winner, clocking 25.72 on her way to a narrow neck win over Posh Di.