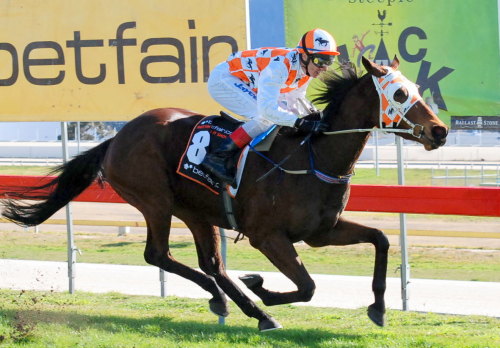 WELL bred filly Sorell Miss has some big shoes to fill if she is to follow in the footsteps of her half-sister Testamarriage.

But if her effort to win her maiden at Tattersall’s Park on Sunday is any indication then she may have what it takes to fill the bill.

Sorell Miss made her debut in Hobart on August 8 but made a mess of the start to tail out to last and flashed home at the business end of the race to finish on the heels of the placegetters.

Last Sunday she was slow to begin again but she mustered speed quickly to settle third on the fence behind the leaders.

While she was apprehensive about moving off the fence to challenge in the home straight, she eventually responded to premier rider Brendon McCoull and she quickly collared the leader and forged clear to win by a big margin.

Sorell Miss (Mujahid-Lemon Soda) is owned by Rick and Tina Polley who also own Testamarriage that was an outstanding juvenile.

She won the $150,000 Gold Sovereign Stakes that earned her Tasmania’s top 2YO award and at three she was very competitive.

Last season she won three in succession before being sent for a spell.

Listen to what co-trainer Scott Brunton had to say about Sorell Miss after her win.