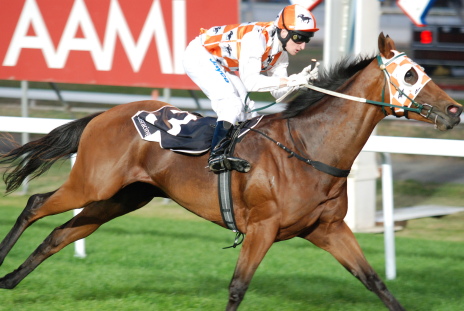 UNDERRATED mare Sorell Miss has been flying under the radar this season but at The TOTE Racing Centre last night she emerged from the depths of obscurity to win the Magic Millions Open handicap over 1200 metres.

Sorell Miss campaigned without success in Victoria early this season without success and she resumed from a four-month break with a midfield effort behind Rebel Bride in a fillies’ and mares race over 1100m in Hobart late last month.

But back to her favourite track and with Craig Newitt aboard she was always travelling like the winner.

Outsider Rutherglen Rhul led to the turn and kicked clear on straightening but he was collared by Sorell Miss that powered to the line to win comfortably over stablemate There Were Roses with Build A Bridge third and just in advance of Obstinado.

It was the first leg of a winning treble for the David and Scott Brunton stable who also won with Lady Lynette in the $100,000 Vamos Stakes and Prevailing that scored impressively in the last race on the card the Cascade Pale Ale BM78 handicap over 2100m..

Prevailing was impressive but surprisingly he was not nominated for the AAMI Launceston Cup.