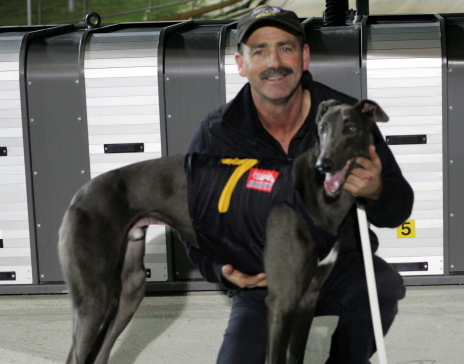 IN-FORM dog Sour Pop continued on his winning way in Hobart last week with a near all-the-way victory in the Tasfreight Stakes (grades 4-5) over 599 metres at Tattersall’s Park in Hobart.

It was the dog’s third win from his past four starts and fifth victory on the Hobart circuit.

The Russell Watts-trained dog has shown a liking for the middle distances but his trainer is about to put him to the test and step him up to the longer journeys.

“We don’t know for sure how he’ll handle stepping up to 700 metres but we’ll have the answer soon enough because he’ll be entered for the long distance medley series up north next week and that should give us an insight into where we are headed with him as far as the longer journeys is concerned,” he said.

Sour Pop (Where’s Pedro-Some Chance) has excelled over the middle distances at Devonport (580m) and Hobart (599m) 580m winning three times at Devonport and twice in the capital city.

While the dog is about to be tested over the longer journeys Watts is not convinced the dog is up to top class over those trips.

“I doubt we would head him to the National Distance Championship because he is not a dog that likes to find the rail and I think a dog has to be able to do that to excel at the top level.”

“He likes to race two or three-off the rail wherever he races and that allows other dogs to get up on his inside and that’s how he was beaten at Devonport the other week by Decembrist,” he said.

In that race Decembrist drew box two and kept pushing up to share the lead but when they turned for home Sour Pop would not drip down to the rails when he was clear of Decembrist.

Even though the eventual winner eased and got to the outside to run Watts’ dog down it might have been a different story had Sour Pup hugged the rail earlier in the race.