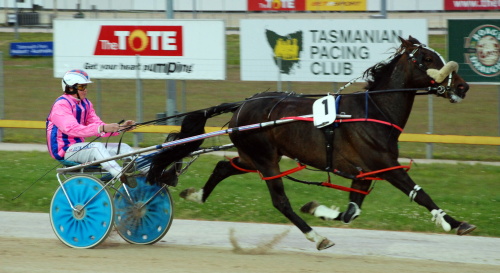 TRAINER Chris Howlett expects Southern Boy to be a valuable asset to the stable based on the gelding’s first effort on Australian soil.

Southern Boy was purchased in New Zealand about four months ago and while he arrived at Howlett’s stable in ready to race condition, his Australian debut was delayed because of a minor injury sustained on the trip across the Tasman.

But the wait was worth it for his new owners Paul and Elizabeth Geard, who are Howlett’s parents-in-law.

With the trainer’s son Justin Howlett in the sulky, Southern Boy (Live Or Die-Andos Prospect) showed enough early speed to hold he front from the pole position and the gelding was rated superbly by the young reinsman.

Mi Mademoiselle faced the breeze for most of the journey but when she moved alongside the leader in the home straight it looked for a fleeting moment that she would get the upper hand.

But to Southern Boy’s credit he dug deep and held on to win by a short half-head from Mi Mademoiselle with Mister Gallenti the same margin away third.

The gelding clocked a mile rate of 2.03.18 which, while not the quickest run on the night, it was good enough to suggest he has a future in Tasmania.

Listen to what trainer Chris Howlett had to say about Southern Boy’s Australian debut – click here .