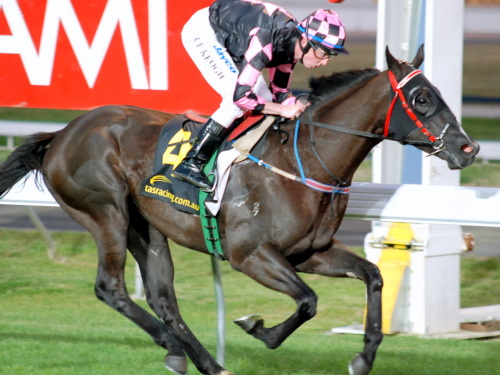 SOUTHLANDER emerged as a horse to follow after he scored a very impressive win in a 3YO Maiden over 1100 metres in Launceston last night.

The Gary White-trained colt had to work hard early to race near the lead and after working outside the leader for a long way he put three lengths on his rivals at the top of the home straight and went on to win convincingly over Aceland and Werbally.

It was an outstanding effort by the gelding that is owned and raced by Geoff Harper’s Seahorse Management Pty Ltd syndicate in partnership with the Amycus Amycus syndicate which is managed by Ron Schwanke.

Southlander (King Charlemagne-Laura’s Express) made an auspicious debut in Hobart on September 26 when he bucked off his rider Ronan Keogh soon after the start and then proceeded to jump the running rail and gallop the entire circumference of the inside grass track.

“This horse is probably lucky to be racing let alone winning a race,” White said.

“He had a problem with his airways and still has the issue but he somehow manages to race well with the disability.”

“If anyone had have read the report on this horse before he got to the races they would be amazed,” he said.

Southlander is a striking brown and black colt that looks to have a very bright future.