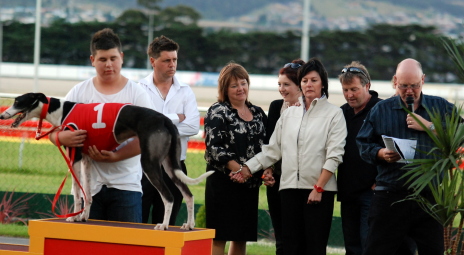 In June 2010 a young teenager by the name of Billy Grice died as a result of a car accident that sent shockwaves through the greyhound industry in southern Tasmania.

Billy loved greyhounds and was one of the most liked lads around the kennels and nobody was more keen to catch a dog on race day or at the trials than Billy.

His two loves in life were greyhounds and cricket and it was with the Glenorchy Cricket Club that he was recognised as a future star.

The Hobart Greyhound Racing Club opted to name a race in his honour and it now has pride of place on the card on Hobart Thousand night.

Since Billy’s untimely death one of Tasmania’s best racing administrators, who recently resigned her post with Racing Services, Lynne Pursell, has become close to the Grice family so it was quite an emotional scene when Lika Whisper won the Billy Grice Memorial over 461 metres last Thursday week.

Lika Whisper was the dog that kick-started Pursell’s greyhound training career about 18 months ago.

Lika Whisper made full use of the inside box and when he found the lead and put three lengths on his rivals turning for home the race was all over.

The dog had not been in the best of form leading up to the race and had not win a race since July.

“This dog has been so good to me and the family because he gave me the start I needed to establish myself as a trainer and now he’s won a race that means so much to my family on a personal level,” Pursell said.

Lika Whisper won at his first start for Pursell in September last year and after 10 starts he had notched seven wins and two seconds.

This latest win was the dog’s 15th for Pursell but clearly one of the most important from a personal viewpoint.

Lynne Pursell said it was one of the most emotional wins she has ever experienced and that was evidenced by the tears that flowed after the race.

The Billy Grice Memorial carries no special amount of prize money and it has littler relevance in terms of putting value into dogs from a breeding perspective .

But the it is becoming a race that owners want to win because of the special something that Billy Grice had for greyhound racing.

His family and friends made up for about 100 of the huge crowd that attended the meeting.