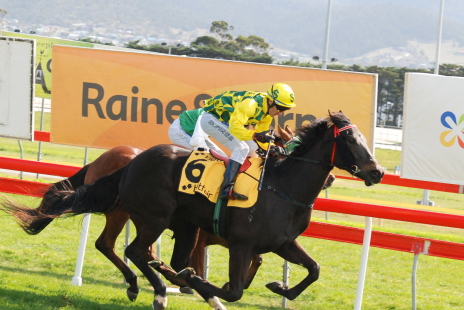 PROMINENT thoroughbred owner-breeder Dudley Clark has always hoped his three-year-old filly Al’s Birthday would do well on the racetrack and from what she showed at Tattersall’s Park in Hobart on Sunday those hopes could turn to reality.

Al’s Birthday (Tough Speed-Georgia Lauren) was born on Clark’s wife Alice’s birthday so one doesn’t have to be a Rhodes Scholar to figure out how this filly came by her race name.

The filly had three starts last season for a debut minor placing and two subsequent midfield results, although her last run as a two-year-old was a handy fifth of nine in the Sires Produce Stakes behind last season’s two-year-old of the year Western Hero.

All three races she contested as a 2YO were won by Western Hero.

On Sunday the filly showed good early speed and raced outside of the heavily backed favourite Streetwise Savoire (Anthony Darmanin) but when in-form jockey David Pires called on Al’s Birthday for the supreme effort in the home straight she dug deep and gained the upper hand close to home to have a long head margin on the line.

Trainer Stephen Lockhart said the filly had returned bigger and stronger but was still a way off realising her full potential.

“She’s still just a big baby and has so much more improvement in her,” Lockhart said.

“I think once she gets to 1400 metres and beyond she will be more in her comfort zone.”

“I expect her to have one or two more runs before I get her ready for the big races over the carnival and that probably includes the Tasmanian Guineas in early January,” he said.

Pires was very impressed with the filly’s desire.

“She loved chasing down the runner-up. She had a real crack that last little bit of the race,” Pires said.