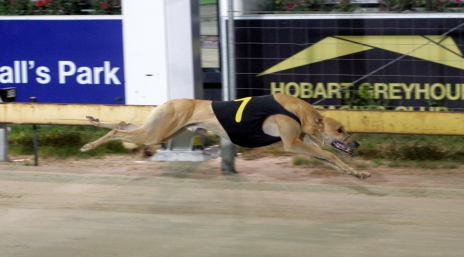 SPIRITUAL One looks set for a bright future following his impressive win in the final of the Hobart Maiden Thousand over 461 metres at Tattersall’s Park last Thursday night.

The Mick Stringer-trained dog wasn’t the best beginner from box seven but he mustered speed to be with the leaders at the 340-metres boxes and when he crossed to find the rail he sped clear and went on to record an effortless win.

Spiritual One (Run’s House-Oodeim Lare) hit the line over six lengths clear of Paua Of Darkness with the reserve Tricky Violet a length astern.

He stopped the clock at 26.26 which was outstanding given the gusty conditions that prevailed.

The trainer said the dog had an unimpeded run to the top turn and that enhanced his chances of winning.

“The eight dog got out teal quick and my dog was a bit slow to begin and that probably helped him.”Stringer said.

“The eight dog (Pure Doll) crossed down sharply and my dog had an unimpeded run and when he let rip he hit the front and finished the race off really well.” the trainer said.

“His biggest assets are his early speed and stamina and they are two things any dog needs if it is going to win a lot of races,” he said.

Stringer was thrilled with the maiden Thousand win and said it wasn’t a surprise as the dog had shown potential from day one.

“When Dave Burnett (owner) sent him to me he had raced at Horsham and led them in fast time until he slipped a monkey muscle,” Stringer said.

“His first sectionals that day were the best on the program so Dave (Burnett) was adamant he would have won the race.”

“I’ve taken my time with him and we had the Maiden Thousand series pencilled in for some time and to win it with this dog is a great result,” he said.

Stringer is confident the dog has what it takes to make an impact interstate.

“We are looking at taking Spiritual One to Western Australia for the Derby and I’ll probably take two or three others from the kennel to make it a decent trip,” he said.

Spiritual lad’s older brother Lettuce Leaf Lad performed well in Tasmania, winning his way through to top grade and Stringer likens Spiritual One to that dog.

Spiritual One ventured to Launceston on Monday night and despite having never seen the circuit before he powered his way to an impressive win in a juvenile over 515 metres.

Ï don’t normally race a dog in Launceston without having seen the track at least once prior but the Monday meeting was his last chance to win a juvenile on the circuit.”

Stringer also had another classy youngster in the series named Rybenbrook that was the fastest qualifying heat winner, stopping the clock at 26.17 over the 461 metres.

“Rybenbrook pulled up a bit jaded after his qually win so I decided not to risk him in the semi-final and left him at home in the kennel.”

“I’ve trialled Rybenbrook and Spiritual One together and Rybenbrook has beaten him every time.”

“I’m sure, barring injury, that Rybenbrook will definitely make it to top- grade.” he said.

Stringer also has high expectations of a couple of pups that he bred by Scull Murphy from his broodbitch Painted Shaza.

“One of the Scull Murphy pups is quite outstanding and another from the litter also is showing a lot of promise so we could be in for some fun with the young ones in the coming months,” he said.