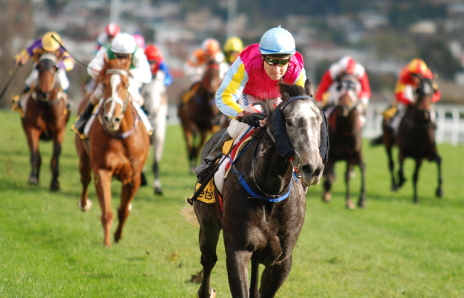 But one that ended up staying at Bowthorpe, after a syndicate folded, has proven to be a handy money spinner for Cochrane and his wife and business partner Patricia.

Spy Wears Prado registered his second win from 13 starts when he made his rivals look like a blur in the background in a talent-packed class one handicap over 1400 metres at Tattersall’s Park in Hobart last Sunday.

With Stephen Maskiell aboard, Spy Wears Prado gave his rivals a galloping lesson on a heavy track to take his career earnings to beyond $33,000 from only 13 starts.

What made the win so special was that the four-year-old gelding was bred by Cochrane from a mare (Personal Spy) that was given to him by good friend Chelsea Goodrick and the gelding is sired by El Maggiore, a stallion that the Cochranes stand at Bowthorpe Stud.

“It’s really satisfying when you win with a horse you own but it’s even better that it has been bred from a stallion that you stand at stud,” Cochrane said.

“The horse has been very consistent being at least placed nearly every start.”

“We tried putting a claiming apprentice on a couple of times to try and compensate for him being weighted to carry 59kg but that didn’t work.”

“We put Stephen (Maskiell) back on and it has paid dividends,” he said.

Spy Wears Prado, prepared at Longford by Dianne Ray-Luttrell, has only started 13 times for two wins and six minor placings for about $33,000 in stakes.

“The horse was sold and was to be syndicated but that didn’t work out so we kept him at the stud.”

“Di (Ray-Luttrell) was foal watching for us about the time Spy Wears Prado was about to be sold so I told her she might as well take him to train and so far it’s proven to be a successful and profitable exercise,” he said.

Cochrane has been breeding thoroughbreds for just over 20 years.

His interest was sparked in 1986 when he ventured into racing horses with good friend Allan Spence who had a lot of success with Russian Rogue that won a Devonport Cup and Hobart Cup in the same year when prepared by Charlie Goggin.

He established Bowthorpe about 20 years ago at his property at Dover but 15 years ago he relocated the business to Longford.

“It seems like a lifetime ago that I first got involved with horses and it’s been a bumpy ride at times but I still love it.”

“We’ve established a good set-up here at Longford and we have three well respected stallions on the books.”

Bowthorpe stands three stallions, El Maggiore that has a 75% strike rate of winners to runners along with Azevedo and newcomer Jayemzed.