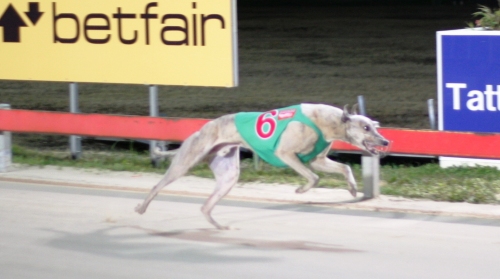 FORMER NSW dog St. Pierre broke through for his first win in Tasmania when he powered home to take out the evolutionrewards.com.au Stakes (Grade 4) over 461 metres at Tattersall’s Park in Hobart on Thursday night.

St. Pierre, now in the care of top trainer Debbie Cannan, began brilliantly from box six to lead and once on the bunny he burst clear and went on to score by almost six lengths from Pearl’s Snow with Claira’s Gem a length astern.

It was only his third start for Cannan. He notched minor placings at his first two starts at Devonport.

His time of 26.30 was full of merit on what was rated a slow track owing to torrential rain that fell on the track in the 36 hours leading up to the meeting.

St. Pierre began his career in NSW in August last year with his first two wins at Bulli.

His next was at WentworthPark where he notched three wins in the space of eight starts.

The dog had been racing in free-for-all company in NSW before being dispatched to Cannan’s kennel last month.