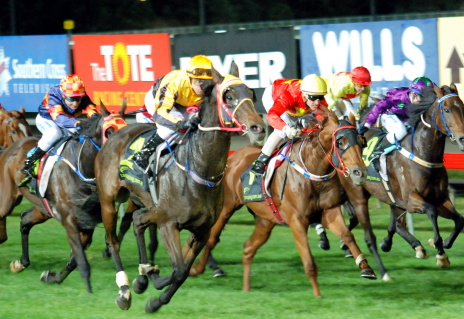 ONE of last season’s most promising stayers Stadacona returned to somewhere near his best to score a convincing win in the thetote.com.au Stakes over 1600 metres at The TOTE Racing Centre on Thursday night.

Stadacona was having his third start this preparation but put the writing on the wall with an eye-catching run second-up in a sprint race over 1120 metres.

With multiple premiership-winning rider Brendon McCoull in the saddle, the John Blacker-trained gelding travelled into the race four-wide from the 600-metre peg and had the race in his keeping when McCoull asked for the supreme effort in the home straight.

He stormed home down the middle of the track to score by 1-1/4 lengths from Borugino with Chainlocker over two lengths away third and just in advance of Starsimp.

Blacker was delighted with the win and confirmed the gelding could be heading to Victoria for a campaign during the winter months.

“There’s no doubt that this horse simply lost the plot early this season but his run prior to tonight gave me confidence that he might be back in the game,” Blacker said.

At three he won five times in the space of six starts over distances ranging from 1550m to 2100m convincing Blacker to think he would develop into a handy stayer.

But at four his firm was ordinary until late in the season that led to him winning the weight-for-age St Leger which after last night’s effort has become the trainer’s main focus.

“I’m confident we can head to next month’s St Leger with some confidence after this win. He only has to hold this type of form and improve a bit to be a chance to make it back-to-back St Legers.”

“If everything pans out as I hope he’ll be off to Melbourne in the winter for some mid-week staying races around 2000 metres,” he said.