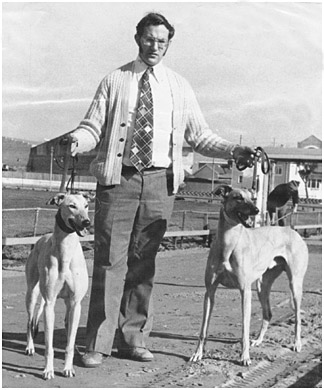 ONE of Tasmania’s most vibrant greyhound racing personalities Richard Stamford had his career capped recently when he was inducted into the Tasmanian Greyhound Racing Hall of Fame.

Stamford has been involved with greyhounds since his early teens and he has been training, breeding, breaking in and owning them for over four decades.

Richard is a son of the late Jack Stamford who was regarded as one of the best harness drivers ever to sit in a sulky in Tasmania and was connected with some of the best pacers to come out of Tasmania including the great Logan Derby and the inaugural Tasmanian Championship winner Master Barry.

Richard ventured into harness racing at age 16 and for the next four years it looked as if he would follow in his father’s footsteps.

But fate stepped in when he suffered a broken leg as a result of a race fall at Carrick, near Launceston, after which his racing future belonged to greyhounds.

He married his childhood sweetheart Jillian Jory and together they have forged a greyhound racing enterprise that remains an integral part of the fabric of Tasmania’s greyhound industry today.

Working at the General Electric Company in Launceston for 15 years,Stamford’s initial involvement in greyhounds was small and he had only modest success.

He broke a horse in for Vivian Beresford and in return he received a free service for his brood bitch Absent Miss toRippleBaythat was owned by Beresford.

The progeny included Dainty Print, Absent Boy and Spring Idol – all winners but none stars.

The first really good Stamford dog was a bitch called Clun’s Wonder, a Tivoli Chief bitch that won the 1977 L.G.O.T.B.A. Final and the 1977 Tasmanian Oaks.

That initial big race victory was simply the launching pad for a career which saw Richard and Jillian breed, rear, break in and train, litter after litter of high class chasers.

Their strike rate in big races was incredible. Richard also became the last of Tasmania’s serious studmasters, all the while holding senior positions with the L.G.O.T.B.A. and then the Launceston Greyhound Racing Club.

The Stamford’s have won three Hobart Thousand’s. Double Time (1984), Shantytown (1990) and Shantung Tiger (1997) not only won the modern day Group One, but were among the greatest Stamford dogs.

Double Time was a freaky chaser that raced only 20 times for 15 wins, breaking his hock in a straight track trial when barely two and a half.

A Stamford home bred, by Time Bonus from Majestic Wonder, he won a vintage Thousand in which star Victorian Chariot Supreme led and only ran fourth with Highland Port and the great Sheila’s Teresa chased Double Time home.

He was never beaten in eight Showgrounds starts, and in two of those wins be toppled Busy Vintage and he also won a Breeder’s Classic and was second in a Devonport Cup.

Shantytown was a mighty dog that won 23 of his 38 starts before standing as one of Richard’s most successful sires.

The red fawn son of Tempix also won the 1990 State Final of the National Sprint and the 1990 Christmas Cup at White City.

Shantung Tiger, the red brindle son of Shantytown – Westlee Silk was arguably the greatest Stamford greyhound. His racing career too was ended before his third birthday with a shattered hock when going for eleven straight wins.

Shantung Tiger won 28 and was placed 11 times from 44 starts. At 21 months old he ran second to Bomber’s A Flyer the 1996 Hobart Thousand before scoring an effortless win in the 1997 Thousand as an odds-on (2-5) favourite.

He also won the 1997 Devonport Cup, 1997 Tasmanian Gold Cup, 1997 Easter Plate, and was runner up in the State Final of the National Sprint and third in the Tasmanian Derby.

“The Tiger” also ventured to Queensland in November 1997 and easily won the prestigious Parklands Derby on grass.

There were so many great chasers from Diamond Park kennels. Jim Bowie was Tasmanian Greyhound of the Year in 1993-94, with 15 wins from 22 starts that included a Devonport Cup and Breeders Classic.

Both Modern Diamond and Majestic Wonder were great sprinter- stayers, winning in excess of twenty races each and scoring multiple victories in Melbourne. Slick Bonus won heat, semi and Final of the initial rich Dapto Maiden in 1983.

Final Point was also a prolific winner.    Apart from being the 1981 Tasmanian Derby victor, he won the Outback Championship at Geelong.

Both Heavenly Fox and Stockholder won Maiden Thousands in the early eighties.

The Stamfords’ not only won the 2008 Hobart Breeders Classic with Capetown Bomber, but had both placegetters as well, in Fine Line and Capetown Harry.

N.S.W. star Silent Wonder was the forerunner in the mid 1970’s as were Dashing Disco, Time Bonus and Shantytown.

With most breeders in Tasmania now preferring mainland sires, Richard Stamford was certainly the last major Studmaster in Tasmania.

Stamford had a long association with the L.G.O.T.B.A. including a period as Secretary. His efforts on behalf of the Northern owners, trainers and breeders earned him life membership of that body. He was also Chairman of the now defunct Deloraine Coursing Club in 1990.

More remarkable has been his decades long involvement with the Launceston Greyhound Racing Club.

He has performed numerous roles for his beloved club, including long time Committeeman, past Chairman, Secretary – Manager, and since 2004, Liason Officer, which, not least of all, sees him working from midday to midnight on race nights at the track.

Stamfordalso has been the Launceston Delegate to A.G.R.A. for more than twenty years.

Little wonder he is a Life Member of the L.G.R.C. and how fitting the Club decided in 2003, to establish an annual race in his honour, the Richard Stamford Perpetual Trophy.

Like other Hall of Famers Reg Ivory and George Johnson, a remarkable woman has backed the efforts of Richard all the way. Jillian is the hardworking, quiet achiever that shuns any spotlight, but the greyhound fraternity in Tasmania respect the amazing role she plays in team Stamford.

They have three children in Rodney, Sonia and Nicole, the former pair also seriously involved in our great sport.

Stamford has embraced virtually every aspect of greyhound racing in this State.

He and Jillian continue to breed and race greyhounds with great success, whilst he continues to work tirelessly to help make Tasmanian Greyhound Racing the best it can possibly be.