Star 3YO pacer taking it easy 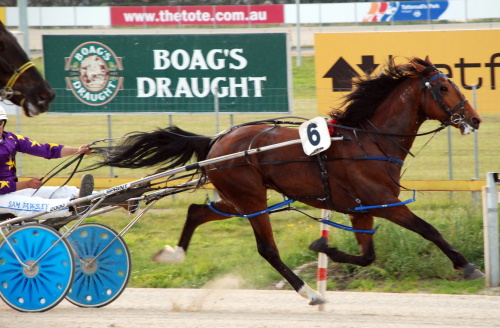 STAR Tasmanian three-year-old pacer Gedlee is expected to come back into work in six weeks to prepare for what could be another stellar season.

Gedlee was clearly Tasmania’s best male three-year-old with his five wins and seven minor placings from 15 starts testament to the gelding’s consistency.

He was second to arguably Australia’s best three-year-old Lanercost in the Tasmanian and Australian Derbies.

Gedlee’s trainer Phil Rawnsley said the colt has done well during his four weeks in the paddock.

“We kept him in work for two weeks after he was to run in the St Leger, that was abandoned because of a lack of nominations and during that fortnight we jogged him down before turning him out,” Rawnsley said.

“He is still spelling on our son Sam’s (Rawnsley) property at Lachlan and after having seen him a couple of days ago I can say he looks absolutely magnificent,” he said.

Rawnsley said the Raider Stakes for four-year-olds is one of Gedlee’s main targets next year but there are other feature races on the calendar of interest.

“The Raider Stakes is definitely on the radar but we also are happy to look at taking him interstate,” he said.

“It all (interstate trip) depends on how the horse returns to racing but even if he only has the same sort of form that he had prior to spelling it could still be good enough to warrant taking him away,” Rawnsley said.

It took Gedlee a while to hit his straps this season but when he did the colt dominated against local rivals.

His first win was in Hobart where he scored by almost 25 metres and clocked a mile rate of 1m.59.2s.

He won again two starts later before chasing home Lanercost in the Australian Derby in Launceston and again in the Tasmania Derby in Hobart.

The colt finished off his season with three wins in succession with his season-ending triumph in the $30,000 Globe Derby Stakes in Launceston in which he clocked a mile rate of two minutes.

Gedlee will be back in Rawnsley’s stables at New Norfolk in mid September with an expectation of him returning to racing in mid to late December.