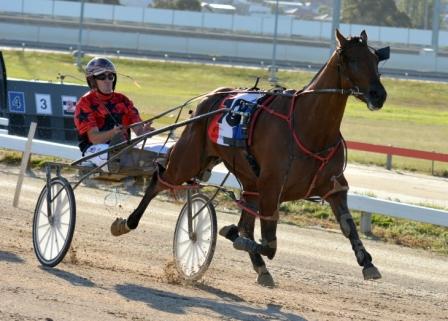 THE emergence of talented pacer Star Chamber as a potential Group 1 contender could be galvanised at Tattersall’s Park in Hobart tonight where he takes on ka class fi0eld in the $20,000 Smithawards Hobart Pacing Cup final over the gruelling distance of 3060 metres.

Star Chamber part realised his potential when he powered his way to an emphatic victory in the Group 3 $40,000 Tasmania Cup in Hobart a month ago and while there is less prizemoney on offer for tonight’s assignment there is more significance attached to the race in terms of the horse’s future prospects.

A win tonight would elevate his chances of travelling to Melbourne to tackle the Victoria Cup that will boast most of the best pacers in Australasia.

The Nathan Ford owned and trained gelding will start from a 20-metre handicap but because he is such a good stand-start horse the impost should not be a great burden to the gelded son of  Our Sir Vancelot.

Tasmanian stalwart open class pacers Our Chain of Command and Motu Crusader come off 30m and 40-metre handicaps respectively and they represent half of the genuine dangers to Star Chamber along with Whodeani that has been placed at his only two starts since returning from an injury-enforced lay-off and Sky Tower that won his Hobart pacing Cup heat with a shock win over Victorian Livin It Lovin It and he then went on to score a convincing win in a claimer in Launceston.

The Hobart pacing Cup is race five on tonight’s eight-event card and it is scheduled to start at 8.28 pm.

Go to Jamie Cockshutt’s tips and form comments for all races.