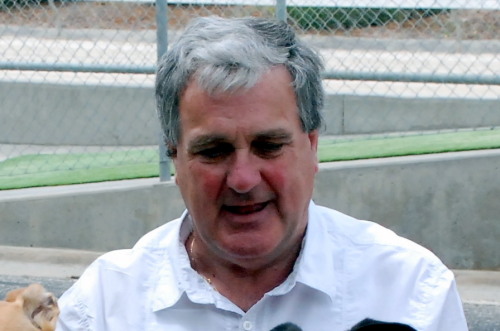 THE Hobart Maiden Thousand series has been used as the launching pad for many of Tasmania’s top greyhounds with Damek the latest to emerge as a potential star.

Damek (Big Daddy Cool-World’s Finest) won his qualifying heat by 18 lengths and in a time of 26.10, which is why punters sent him around the $1.40 favourite in his semi-final.

He didn’t let his backers down, beginning well from box eight and once on the lure he sped clear clocking a sizzling second split of 11.15 and went on to score by 12 lengths in a time of 26.16.

Damek is trained in Launceston by Eileen Thomas and is owned by his breeder Peter Phillips who is excited about the dog’s prospects.

“The litter broke in well but this one and Decembrist looked like being the most forward and that’s how it’s panned out,” Phillips said.

“Decembrist has already proven himself and we were hoping Damek would do well in this series but when he clocked 26.10 in his qually heat we knew we probably had something a bit special.”

“He did it again tonight (in semi) so we are hoping he can continue to improve and if that happens the sky could be the limit,” he said.

His well-bred dog Pure Tiger (Pure Octane-Bella Portrait) produced one of the runs of the night to win his heat.

Pure Tiger, raced by the Victorian-based Check It Out syndicate and managed by Paul Sofra, began poorly from box one and was spat out the back early.

He was still worse than midfield turning for home but he somehow managed to weave his way through the pack.

The dog showed great track sense to squeeze through a gap between the leaders close to home and hit the line over two lengths clear of Capetown Kid and El James in a time of 26.60.

Howard’s well-bred bitch Delilah Dianne impressed in winning her heat in a time of 26.46.

The Mick Edwards-owned bitch by Surf Lorian from Dark Delilah was first out from box eight and was never threatened on her way to a 4-1/4 length win over the well-backed Power Broker.

Howard’s other finalists are litter sisters Larkhill Ashlee and Miss Larkhill and both were impressive winners.

Miss Larkhill (Larkhill Jo-Portlee) began well from box six and eventually found the front at the top turn, only to be checked from behind.

Despite the interference she remained balanced and went on to score by four lengths from Just Big Ernie and CourierSchool.

However, Larkhill Ashlee had a trouble-free passage. She flew the lids from box eight and once on the rails she sped cored by nine lengths in the slick time of 26.40.

Topline Mick produced a tremendous effort to win his heat and progress to the final.

The Mick Stringer-trained dog began only fairly from box four and had half the field ahead of him on the homer turn.

But he dug deep in the straight to run the leaders down and go on and score impressively by four lengths from Chinchilla and Secret Herbs.

He is the oldest dog in the series but he virtually untried as he broke down after only one start about a yea ago.

He resumed in December by passing a stewards’ trial on December 14 and then ran unplaced at his only other start in a grade five event in Launceston two weeks later.

He won his Maiden Thousand qualifying heat impressively and looms as a chance in the final.

The Larry Tanner-trained Hellyeah Duchess made her way into the final with a resounding heat win.

She found the front from box three and after a stoush with outsider Ford Maniac she burst clear and hit the line over a length clear of that dog with Dr. Totem over four lengths astern.