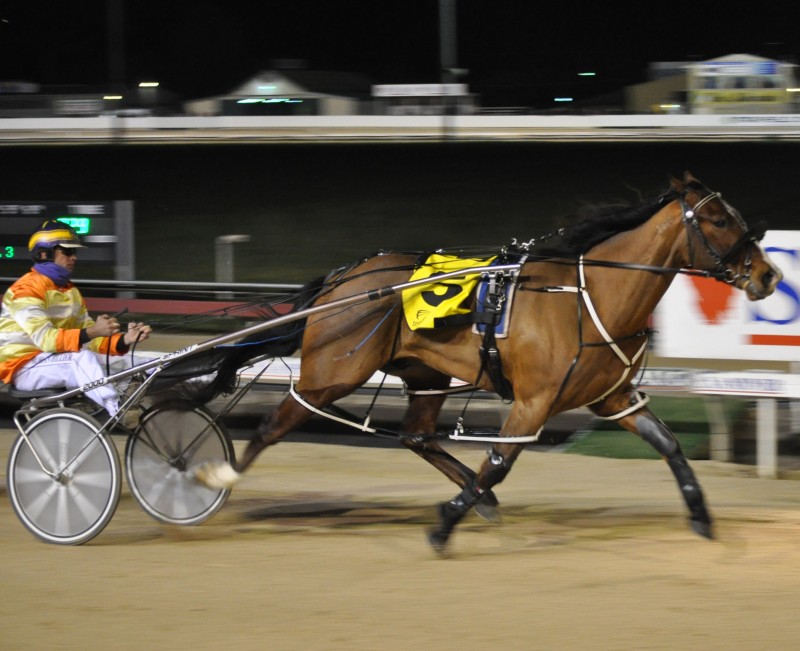 PROMISING two-year-old pacer One Mans Pass is likely to be a travelling companion for his high-profiled stablemate Barynya when she embarks on a trip to Victoria in a fortnight to prepare for her 3YO fillies’ Breeders Crown assignment.

Barynya is one of the favourites to win her division of the Breeders Crown and not surprising given she won the Tasmanian and Victorian Oaks and was favourite in the recent Group 1 Vicbred Super Series final in which she was devoid of luck.

One Mans Pass, prepared at Karoola by Dick Eaves, earned his trip away when he scored an effortless win in a 2YO Pace at Devonport on Monday night.

With Rohan Hillier in the cart, One Mans Pass faced the breeze throughout but when he was asked to extend at the business end of the race he forged clear and went on to score comfortably from Karalta Jazzman and Be Good Franklin.

“This is a very nice horse – he’s got wheel and he’s very strong,” Eaves said.

“If he is spot on, I’ll take him with Barynya and run him in a repechage of the 2YO Breeders Crown.”

“He won’t be out of his depth because I reckon he can handle that class.”

One Mans Class was third behind Boasson Hagen in the Tasmanian Breeders Crown heat in Launceston last Sunday week prior to winning on Monday night.

“He went a bit roughly on the home turn in the Breeders Crown heat and they ran home (the last 400m) in 27 seconds so it was a good effort,” he said.

At his only other outing (on debut at Ballarat in Victoria) he broke just after the start and that was the end of his chances.

“He trialed really well before his debut run but then we had him shod and I think it might have left him a bit foot sore,” Eaves said.

Barynya and One Mans Pass are owned by Lloyd and Judy Whish-Wilson.