Stars line up for a crack at national glory 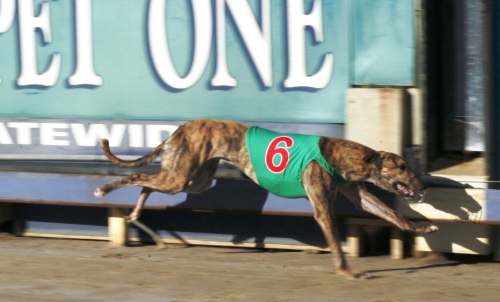 STAR Tasmanian greyhound Damek is one win away from representing Tasmania at the National Sprint Championship in South Australia later this month.

Damek is unbeaten from 11 starts in Tasmania and while he will start a warm favourite in his state sprint final over 515 metres in Launceston tonight it is clearly his toughest assignment.

The Eileen Thomas-trained dog has drawn box seven and will need to be at his brilliant best when the boxes open if he is to keep his unbeaten record in Tasmania intact.

A slow beginning could see him crunched at the first turn but if he flies the lids, the wide alley won’t be a concern.

Tombstone Jack has drawn ideally in box one and only has to mirror his heat win to make his presence felt for a long way.

The veteran Eagle Eye has drawn the squeeze box (5) but he is such a brilliant beginner in Launceston he looms as the likely leader at the winning post the first time.

High Choice is a real contender if she begins well but from box four she might be in some trouble at the first turn.

There is no doubt Damek looms as Tasmania’s best chance to win a National Sprint Championship since the David Crosswell-trained Busy Vintage was successful in 1984 at the HardPark rack in Sydney.

The state National Distance Championship final over 720m looks a match in three with Thirteen Black likely to stat favourite ahead of Posh Di and Sitka.

Posh Di has drawn ideally in box one and if she leads, the Anthony Bullock-trained bitch will be very hard to beat while Sitka also has early brilliance and her best chance of winning her way into the National final at Angle Park on Saturday week (August 28) is if she can find the front early in the race.

But the class act rattled home along the rails to win in the last stride.

Like Damek, Thirteen Black has the make-up and ability to be very competitive in a national final.