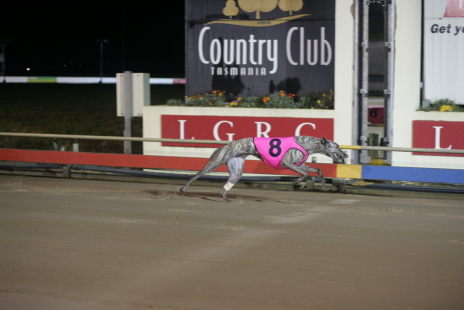 Tasmania’s best greyhounds will be on show at The Tote Racing Centre on Monday Night as they battle to represent their State on the National stage at Albion Park on August 25.

Susan Gittus would love Ming Dynasty to win the Distance Final (R6) and take her to Brisbane to race in front of her owner Paul Felgate.

After last week’s sensational run she should start favourite but even Gittus suggests “she can’t expect to get that far back and win all the time.”

Her time last week 43.33 was a shade off Capetown Gem’s front running display of 43.22 while Thirteen Black 43.57 will certainly improve on his winning time and these three look like running the trifecta.

The sprint final (R8) has four main chances, Tadmore Dunoon, prepared by Ted Medhurst at Mangalore who is the best drawn of the field.

Ella Lucy with her early speed can establish a winning lead at box rise, the champ himself Damek, who is the track record holder at a blistering 29.40 and Australian Cup winner St. Pierre, who will be better for last week’s run.