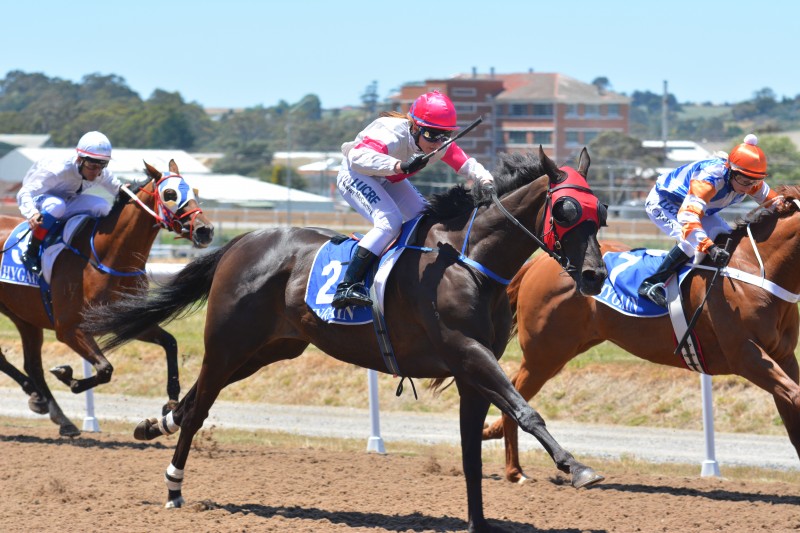 FLYING STEVIE captured the imagination of the racing public recently as he continued to finish second in a string of races that gained him notoriety, much to the chagrin of his trainer John Blacker.

But at Spreyton yesterday the five-year-old gelding finally broke his maiden status.

With apprentice Hayley McCarthy aboard, Flying Stevie enjoyed the run of the race just off the speed and when McCarthy called on him to extend in the home straight he did what he did at numerous previous starts – cruised to the leader and threatened to win.

But this time he finished the job and did so impressively.

Trainer John Blacker found it difficult to conceal his emotions as he scurried from the grandstand to the unsaddling enclosure.

Flying Stevie was having his 16th start with his record prior to winning boasting nine seconds and a third.

It was the middle leg of a treble for Blacker who also had success with three-year-old filly Miss Mars and his five-year-old entire Our Casanova that delivered a career-best effort to win the Alan Hardstaff Memorial BM62 over 1150 metres.

Our Casanova’s win was a surprise result for Blacker who believed he may have needed the outing.

“He’s a stallion that was having only his second start after a spell, so I thought he would need another run before winning,” Blacker said.

“But he’s always been a nice horse – he was just below the better three-year-olds last season.”

“The two things in his favour today were that he likes this track and he had trialed good,” Blacker said.

Listen to what trainer John Blacker had to say about Flying Stevie’s win.