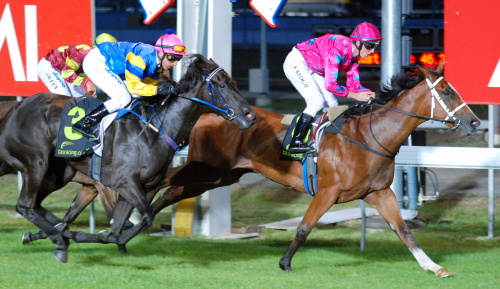 AT a cost of $115,000 Heaven’s Choice is one of the highest priced yearlings to race out of the Gary White stable but the money appears to be well spent if the filly’s debut effort is any indication.

Heaven’s Choice (Stratum-Prayer Time) made her debut under lights in Launceston on Thursday and went into the race without having been to the trials and she had not even been tested on a grass surface.

But White remained confident she would hold her own on debut but she did far more.

With talented apprentice Ronan Keogh aboard, the filly showed good early speed to settled off the pace that was set by the other first-starter Ambassadora (Rock Of Gibraltar-Diplome) that was heavily backed to start the third favourite behind Triple Asset ($2.70).

Ambassadora led to the home turn where she was collared by the John Keys-trained Triple Asset but that filly had no answer to Heaven’s Choice powerful finish.