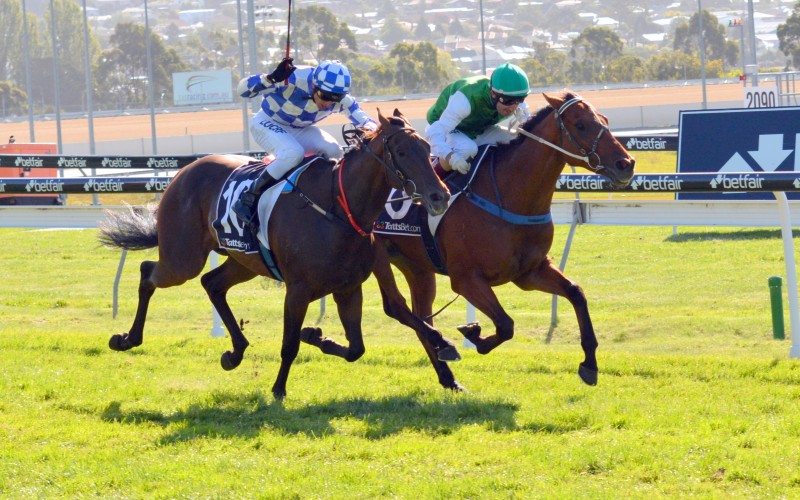 STREETWISE SAVOIRE has always promised to win a feature race and he chose the Tasmanian Racing Club’s biggest day to deliver the goods.

The Scott Brunton-trained gelding was one of three from the stable to contest the $100,000 weight-for-age Thomas Lyons (1400m) but he was the rank outsider of team Brunton.

Hellova Street was backed to beat the favourite Admiral while the connections of Royal Rapture ensured he started at a tight quote.

Hellova Street (x Helike) raced outside the lead but Admiral had his measure turning for home and Royal Rapture was to far back to be a realistic winning chance.

But it was Streetwise Savoire (X Savoire Vivre) with Anthony Darmanin aboard that stole the show at $35 that turned a whole heap of quadrella tickets into confetti.

“We always believed in Streetwise Savoir as a potential weight-for-age winner and even though he was at big odds in this race we gave him a genuine winning chance, especially when the track started to cut up because he is suited in that ground,” Brunton said.

“I’m rapt for the owners because it hasn’t always been smooth sailing with this horse.”

“The Thomas Lyons is probably on of the most sought after weight-for-age races on the calendar so winning it is a privilege,” he said.

Brunton said Streetwise Savoire and his half-brother Hellova Street would progress to the 1600-metre George Adams weight-for-age race on Launceston Cup day while Royal Rapture would contest the 1200-metre open sprint on the same day.