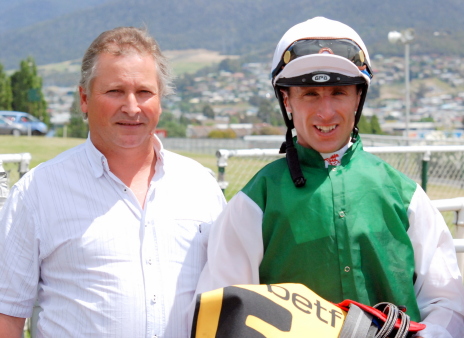 IT was a long wait but well-bred three-year-old gelding Streetwise Savoire finally delivered the goods by winning the She Model management 3YO and upward Maiden Plate over 1100 metres at Tattersall’s Park in Hobart today.

With Brendon McCoull aboard, the David and Scott Brunton-trained gelding travelled well to the home turn before claiming the lead entering the home straight.

Streetwise Savoire forged clear and went on to win by 3-1/2 lengths from first-starter No Go Zone with the winner’s stablemate Cerise Sauvage a long head away third.

Streetwise Savoire has given her connections plenty of sleepless nights with her antics on race day resulting in her being scratched at the barriers three times.

She finished second at each of her three previous race starts so the win was certainly a breath of fresh air for her owners Larry Lamont, Allan Virieux, Steve Saltmarsh, Melinda Lamont and Laurie Virieux.

The gelding was bred by Larry Lamont who has been involved in racing for most of his life courtesy of his father, the late Alan Lamont, who owned Sandy’s Gold that ran third to Palomine in the 1983 Hobart Cup.

“We’ve had an interesting time with Streetwise Savoire so far, to say the least,” Lamont said.

“We’ve had to be patient but I think it’s all been worth the wait.”

“I bred this horse so I’m hoping he can go on and live up to the promise he showed early on.”

“We’ve got a two-year-old half-brother by Helike and the mare (Butter Street) has a foal at foot by Sharkbite.”

“The mare also has tested positive in foal to Savoire Vivre so she will produce a full brother or sister to Streetwise Savoire,” Lamont said.

Savoire Vivre unfortunately died recently so whatever mares are in foal to him will produce that sire’s last crop.