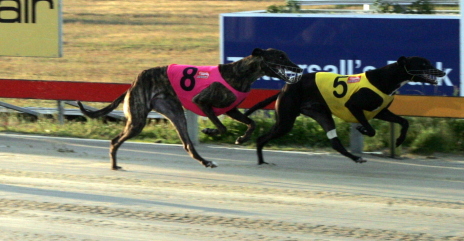 IT is rare for a Mick Stringer-trained dog to win a race at lucrative odds, especially when they win like an odds-on chance.

But that’s what happened at Tattersall’s Park in Hobart last week.

Din’s Chappi was having only his second start but had shown enough on debut when second to the highly promising Hellyeah Sam in a juvenile a week earlier to suggest his first win was only just around the corner.

Despite the eye-catching effort on debut punters let his ease dramatically in the betting to eventually start at almost $14.

Din’s Chappi was slow out from box five and settled near last while Bangkok Star showed good speed to lead with the odds-on favourite Overeem (8) looming large out wide.

When Overeem crossed over to take the lead he sped clear and looked home for all money at the top of the home straight.

But Din’s Chappi put in the huge strides and darted to the leader’s inside close to home to grab victory in the shadows of the post.

Din’s Chappi is owned and raced by Karen Leek from Victoria who has had a lot of success with the dogs she has sent to Stringer.