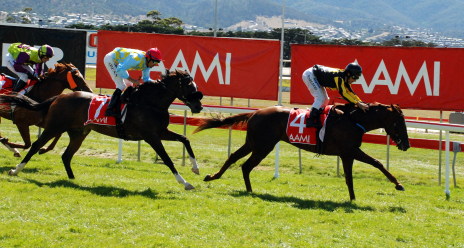 MORNINGTON trainer Alex McPherson only has four horses in his yards back in Victoria but the talented horseman believes one of the quartet, Temper Tantrum, has the ability to be a major player in fillies and mares staying ranks.

Temper Tantrum proved her worth as a potential star stayer at Tattersall’s Park in Hobart yesterday where she delivered the goods in the $100,000 Strutt Stakes over 2100 metres.

With Rhys McLeod in the saddle the daughter of Hold That Tiger rode shotgun outside of the leader Gee Gee’s La Quita to the home turn and when the rider called on her for the supreme effort in the home straight she dug deep and went on to score by over a length from Khandallah with Gee Gee’s La Quita a game third.

Temper Tantrum and Khandallah were the only two interstate invaders in the field of seven.

McPherson was delighted with the win and confirmed his star filly would progress to the PFD Food Services Tasmanian Oaks in Launceston in 10 days time (February 22).

Listen to what McPherson told Peter Staples in a post-race interview – click here .