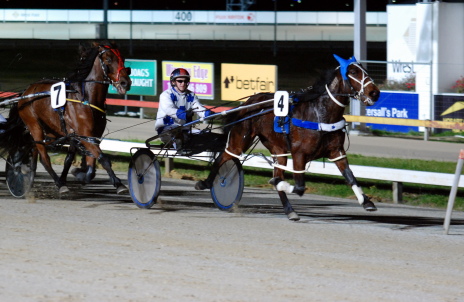 LACHLAN trainer Marc Butler has reasonable expectations for his lightly raced three-year-old filly Sunrise Lady following her all-the-way win in the Craig Hansen 3YO Pace over 1609m at Tattersall’s Park in Hobart on Sunday night.

Sunrise Lady was having only her second start this preparation but had no trouble finding the early lead and then staved off al challengers in the home straight.

With talented reinsman Mark Yole in the sulky, the filly went on to score by almost three metres from the heavily backed Diamonds Are Magic with Terror Jones just under a metre away third.

Butler has always had an opinion of the filly despite having notched only one minor placing as a two-year-old.

She was sent for a spell after finishing a game second to Hamish Sanz in a 2YO in Hobart at the end of August last year.

“I thought she did enough last season to suggest she would win a few races and this time in she has done everything I’ve asked of her and tonight I thought she would be very hard to beat if she could find the front,” Butler said.

Listen to what trainer Marc Butler and driver Mark Yole had to say about Sunrise Lady’s win – click here.

Story and photographs By Peter Staples