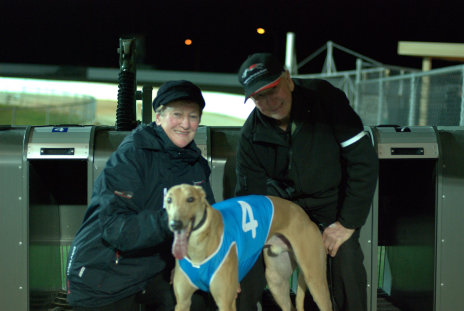 TRAINER Mark Sutcliffe celebrated an overdue win in Hobart last Thursday night when his lightly raced dog Surf Osti proved too strong for his rivals in a juvenile event over 461 metres at Tattersall’s Park.

Surf Osti was having his 15th start but after seven minor lacings on various tracks he finally delivered.

The son of Surf Lorian began well from box four and led to the top turn but was headed by Larkhill Man that looked to be travelling like the winner turning for home.

But that’s when Surf Osti’s strength kicked in and he came again in the home straight to go on and score by a half-length from Larkhill Man with Starlena almost three lengths astern.

“I’m sure he will be better suited when we put hi over the m idle distances and beyond,” trainer Mark Sutcliffe said.

“The nest part of his races lately have been the latter stages and that’s what he did tonight.”

“He is very strong and his box manners are improving all the time.”

“This was our last chance to get a juvenile win out of him so at least we’ve got that but further down the track he could excel when he gets over 600 metres and beyond,” he said.

His mother Shirley was ecstatic after the win.

“This is the first dog Michael has owned so he will be thrilled,” Mrs Sutcliffe said.

“We’ve only ever had two or three dogs in the kennel at any one time but having one that is owned by our son is a bit special,” she said.

Sutcliffe has had a lot of success in recent years with Fisherman that is still going as a five-year-old.

Last year Fisherman won the Group 2 Launceston Cup to give Sutcliffe his biggest win as a trainer.

Surf Osti is hardly likely to go on and achieve the feats of Fisherman but in the meantime he should at least give connections a few more thrills.