Sutter Hanover to stand in Tasmania 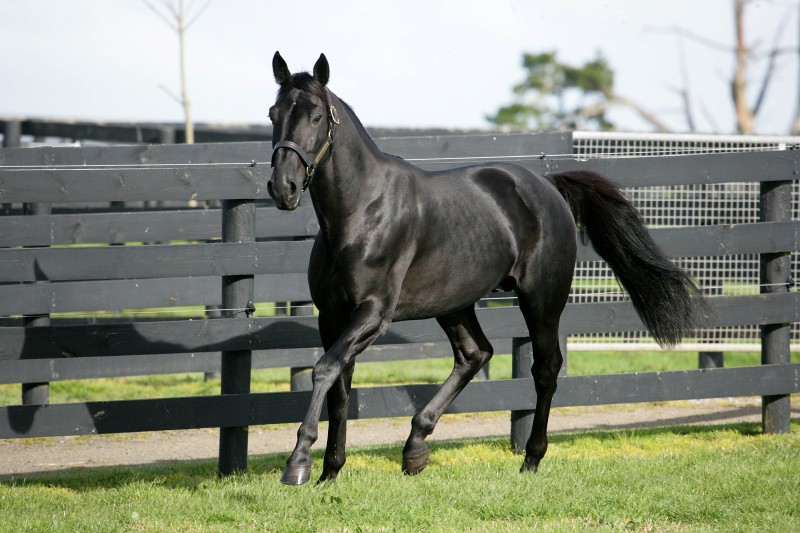 SUTTER HANOVER (3, 1:50.8), the first son of former champion pacer Dragon Again to be imported to Australia, will stand in Tasmania next Spring.

Sutter Hanover, a stakes winner at both two and three, will stand at Sue and Hans Streit’s Elderslie Horse Care and Spelling, Elderslie, 50 kilometres north of Hobart.

He will stand alongside leading sire Time Stands Still and dual Tasmanian Horse of the Year Mountain Glory.

Sutter Hanover will stand for a fee of $1500 including GST.

Sutter Hanover, a striking brown horse, foaled in 2004 was represented by his first crop as two-year-olds last season. They include a pair of WA fillies, Blacknsweet Adda, a placegetter in the $100,000 Diamond Classic, and Secret Dragon, who won twice in February, and the juvenile classic finalistsRiver Shark, Piccadilly Dixie and Georgia Dianne.

Meanwhile his second crop this year has produced a very smart colt in Sutter Man, who was runner-up in a heat of The Lombo, Unseen Hanover, a winner in WA, Secret Splendour (3 x 2nds from 4 starts) and several trial winners.

Sutter Hanover was a top racehorse himself, winning close to $950,000, and he was in the top bracket of American two and three-year-olds of his time.

As a two-year-old he won an elimination of the Breeders Crown in 1:50.8, making him the tenth fastest two-year-old of all-time.

Undoubtedly the highlight of his career came as a juvenile in the $450,000 Governor’s Cup at The Meadowlands when he overcame a torrid passage to score in runaway fashion in 1:52.

He took his record of 1:50.2 at three years, winning the $100,000 Burlington Stakes at Mohawk in a season’s record. He also captured an elimination of the North America Cup in 1:50.8 and finished a game second in the $1.5M Final and third in a heat and a close-up fifth in the final of the $1M Meadowlands Pace, clocking 1:49.6 on both occasions.

On the score of blood Sutter Hanover lacks nothing. His sire Dragon Again (1:48.6) was a champion with stake earnings of $2.3M and has been one of America’s top sires for some time. He figures as the sire of two of America’s greatest pacers in Foiled Again ($4.6M) and My Little Dragon ($2.3m).

Dragon Again, who stands at the famed Hanover Shoe Farms, has progeny earnings in excess of $80M and last year finished third on the USA All Aged list and fourth on the 2YO list.

Sutter Hanover belongs to one of the most interesting families in the American stud book. His dam Sami Cam (1:56.6) has left eight winners in 1:56, six of whom took records of better than 1:55 and four $100,000 winners.

Sami Can was by the champion sire and broodmare sire in the great No Nukes (1:52.2) and was out of French Dressing (1:56.4), one of the best two and three-year-old fillies of her era and dam of the 1:55 sire Ft Apache Hanover. French Dressing was a half-sister to the top racehorse and sire French Chef and the successful NZ sire Plat du Jour.

The family traces back to a noted foundation mare in The Old Maid, a half-sister to Light Brigade and the dam of Bachelor Hanover.

Sutter Hanover boasts a 4×4 cross to influential sire Most Happy Fella, the same sire line as Bettor’s Delight, Fake Left and Armbro Operative. He also carries the blood of No Nukes, Albatross, Abercrombie and Overtrick, all champion sires and broodmare sires.