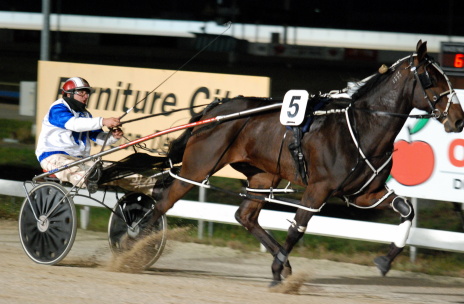 HOME grown two-year-old Lickyalips looks set for a bright future following his outstanding victory in the $10,000 Island Block and Paving Golden Slipper over 1680 metres in Launceston on Sunday night.

Lickyalips, bred by his trainer Rodney Ashwood, led throughout to defeat Palmisano by six metre s with the winner’s stablemate Im Royal Tonite just over a metre ay third.

It was a brilliant performance by the youngster as he had to work to find the lead from a wide gate but once in front he was rated superbly by in-form driver Ricky Duggan.

When Duggan released the reins at the top of the home straight Lickyalips bounded clear and won like a very good horse.

Lickyalips (Royal Mattjesty-Strawberry Kisses) stopped the clock at 2.04.1for a slick mile rate of 1m.58.9s that was only marginally outside of Thirsty Mach’s age a and sex record (1.58.6) over the Launceston 1680-metre circuit.

The gelding is owned by the trainer’s wife Paige Ashwood in partnership with Linda Duggan, wife of driver Ricky and prominent owner Jamie Cockshutt who also part owns the third-placed Im Royal Tonite that he races with Barry Cooper and David Kamaric.

It also capped a great night for driver Ricky Duggan who notched four winners on the 10-event card with Scruffy Jake, Medusa Miss and Flying Dubai his other winners.