Sybil breaks through for overdue win 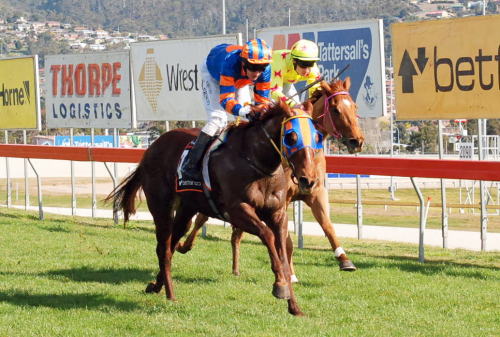 LONGFORD trainer Troy Blacker had plenty of reasons to smile at Tattersall’s Park in Hobart today (Sunday) after he saddled up the first two winners on the nine-race card.

Hot Sybil (Kelvin Sanderson) finally broke her maiden status when she outgunned her rivals in the Billie Peacock Maiden over 1100 metres.

With Kelvin “The Iceman” Sanderson in the saddle, Hot Sybil settled third and travelled like the winner from the 600m to the turn. When Sanderson called on the mare for the supreme effort she let down well.

The Alannan-Burn Baby Burn mare collared the leader Telestory 150 metres out and went on to defeat that horse by 1-1/2 lengths with rank outsider Pickwick Silver almost two lengths away third.

Blacker saddled up Blue Light to win her maiden in the following race.

Listen to what trainer Troy Blacker had to say about Hot Sybil’s overdue win – click here .