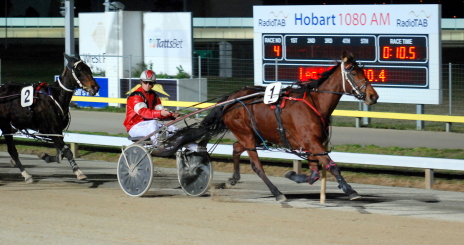 TALENTED harness trainer Heath Szczypka has earned a reputation for fixing problem horses and the latest to show up as a result of his magic touch is three-year-old filly Mon Soie.

The filly delivered the goods in Hobart last Sunday night leading all the way in a 3C0-3C2 over 2000 metres.

Szczypka had only had the filly for a fortnight but it was long enough for him to sort out a couple of problems that paved the way for her only win this season.

Mon Soie is owned by Leigh Dornauf and his family from Launceston but Dornauf’s business commitments as manager of Roberts Ltd in the North of the state led him to seeking help from Szczypka.

The filly had been placed in four of her seven starts for Dornauf this preparation and that included consecutive close-up seconds at Devonport in July.

But having her first start for Szczypka she stepped straight to the front from the pole position last Sunday night and the end result never looked in doubt with Todd Rattray in the sulky.

Listen to what talented horseman Heath Szczypka had to say about Mon Soie’s win – click here.