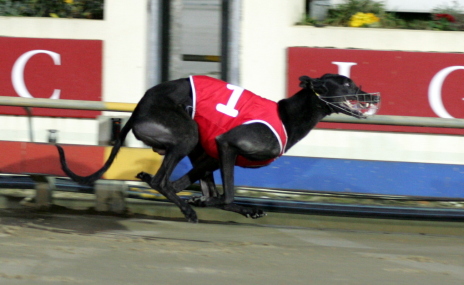 TASMANIAN Derby winner Tadmore Dunoon is one win away from taking on the best sprinters in Australia following his impressive victory in a state heat of the National Sprint Championship at The TOTE Racing Centre in Launceston last Monday night.

Tadmore Dunoon has been a revelation since arriving in the kennels of astute mentor Ted Medhurst.

The dog began only fairly from box one and gave Australian Cup winner St Pierre a start but he proved too strong for that dog over the concluding stages.

It was Tadmore Dunoon’s ninth win from 12 starts in Tasmania and it was his seventh win on the Launceston circuit from 10 tries.

Boom sprinter Damek had his colours lowered in his heat when the Butch Deverell-trained bitch Ella Lucy showed blistering early speed to lead while Damek found trouble at the first turn and again in the home straight.

Ella Lucy led her rivals a merry chase and while she was feeling the pinch over the final 80 metres she had enough in reserve to score by a head from Roo’s Blue with Damek a neck away third.

Damek scraped into the final as one of the two fastest thirds.

Hellyeah Jacko produced his best effort for some time to clinch his berth in the state sprint final.

The Anthony Bullock-trained dog showed good early speed to share the lead with the favourite Ice Krystals at the first turn.

Hellyeah Jacko trailed Ice Krystals to the homer turn but when the leader ran wide turning for home Bullock’s dog breezed through to grab the lead and held on to defeat Mythical Flyer by a head with Ice Krystals a half-head astern.

Box draw for the final next Monday night over 515 metres.