Tap It In flies under the radar 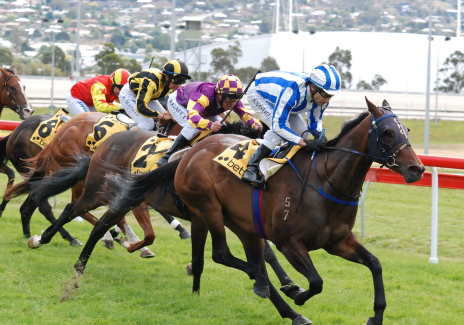 RARELY does a Charlie Goggin-Luella Meaburn galloper fly under the radar if it has great form but such is the case with Tap It In who notched another impressive win at Tattersall’s Park inHobarton Sunday.

The five-year-old mare was having only her 12th start but it was her fifth win and she also has amassed four minor lacings along the way.

Tap It In’s latest win was one of her best as she came from well back off a hot pace to blow her rivals away over the concluding stages of the 1100-metre class four event.

She hit the line with a clear margin over Shardoo that travelled wide throughout and Double Unique that was doing her best work at the business end of the race.

It was a strong field, as is usually the case at class four level over sprint distances inTasmania.

Tap It In has shown above average ability from day one and Goggin believes she could win a feature race – in time.

Listen to what co-trainer Charlie Goggin has to say about Tap It In – click here for audio file.