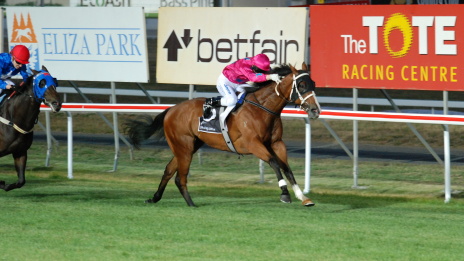 Plastic running rails have been installed at The TOTE Racing Centre at Mowbray and are planned for installation at Tattersall’s Park in Hobart.

The new plastic rails at The TOTE Racing Centre were used for the first time on Wednesday night (january 4).

The Minister for Racing, Bryan Green, said this cutting edge technology had already been installed at Tapeta Park at Spreyton and had been well received by participants.

Mr Green said the “breakaway” plastic rails system greatly reduced the chance of injury for both jockey and horse in the event of a collision with the rail.

“Put simply, the rail post breaks away at the base on impact,” he said.

Manufactured in France, the PVC rails have a UV resistant layer which is coated onto the exposed sections of the rail.

The general manager of the Tasmanian Jockeys Association (TJA), Kevin Ring, congratulated Mr Green and Tasracing for their ongoing commitment to protecting the welfare ofriders and horses.

“The TJA and I have pushed for plastic rails since they were first introduced in Victoria,” he said.

“The installation of the plastic rails at Spreyton, Mowbray and Elwick is the most significant step the racing industry has taken to improve safety in the history of horse racing in Tasmania.

“The plastic rails will revolutionise the safety of both jockey and horse.”

Mr Green said he had been advised that when the plastic rails were installed at Tattersall’s Park, Tasmania would be the only state in Australia that featured plastic running rails at all of its thoroughbred venues.

He said the rails had been delivered to Hobart for installation later this month.