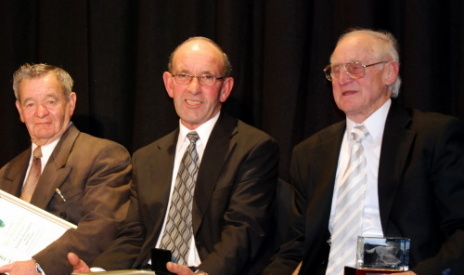 TASMANIA’S thoroughbred industry is in mourning for the loss of former trainer Len Dixon who was one of the industry’s icons.

Dixon passed away in the Latrobe District Hospital last Friday after a short illness.

He was regarded as the consummate horseman with fellow trainer Michael Trinder regarding him as the best he had that saw him reach the pinnacle in his home state and he was highly regarded and respected as a master horseman by his peers interstate.

Dixon was one of the inaugural inductees into the Tasmanian Racing Hall of Fame and two years ago he was elevated to Legend status.

It was as a trainer that he made his mark in Tasmania with one of best performed being Mendeara Etoile that also won multiple races interstate.

He trained the winners of every major race inTasmania, including the Launceston Cup in 1979 with Jessephenie and 1982 with Andrias and the 1981 Hobart Cup with Andrias.

“I haven’t known a better trainer since I’ve been training,” Mr Trinder said.

“Probably of all the trainers I looked up to in Tasmanian Racing, Len Dixon, would be the best,” he said.

After seeing active service with the army inNew Guineain World War II,Dixon returned to racing at Caulfield and took up jumps riding.

It brought him toTasmania, where he settled permanently at Latrobe, and he later took out a trainer’s licence.

He won four Devonport and Deloraine cups and he also was successful in feature jumps races winning the Tasmanian Grand National Steeple twice.

He was the original trainer of Tasmanian St Leger winner Sydeston, who went on to win the 1990 Caulfield Cup when switched to the care of Bob Hoysted.

Dixon retired from training in 2008.