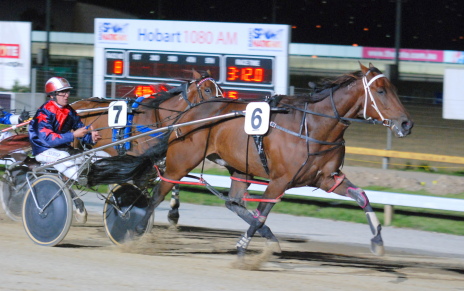 Some Tasmanian harness owners are smiling all the way to the bank after wins in New South Wales and New Zealand late last week.

A winner of four of her five starts before a spell in late August, including a $150,000 Harness Jewels Final and a $20,000 consolation of the Australasian Breeders Crown in Victoria (Aus), Delightful Christian rolled straight to the lead in the $18,000 heat and won comfortably.

Delightful Christian has won six races from 11 starts for $121,931 in stakes for her Tasmanian owners.

Tasmanian harness horses had a day out at Goulburn on Friday afternoon. The meeting was transferred from Menangle where extensive reconstruction is underway.

Left Loaded was the first of three Tasmanian horses at the meeting.

He was taken to the lead early in the $22,000 race and not only did he lead all the way but he set a track record in the process.

Left Loaded is in the care of Darren Hancock during his NSW campaign but when the stint is over he will return to his part-owner and Tasmanian trainer Steve Lukac.

The gelding arrived in Hancock’s stable in late July this year and has been a model of consistency at Menangle meetings with three wins, a second, a third and two fourths from eight starts for $35,210 in stakes which has taken his career earnings to just beyond $114,000.

Left Loaded’s track record stood for only two races Fellow Tasmanian-owned gelding Our Sir Jeckyl powered home in a $12,000 race to record a mile rate of 1.53.7.

The 2011/2012 Tasmanian harness horse of the year has been a consistent performer in top class in New South Wales since relocating there in June this year where from 15 starts he has secured three wins and as many minor placings for $41,800 in prizemoney.

The third of the Tasmanian owned runners was Tisu Holly. The five year old mare ran home strongly for third in a $22,000 race at her third New South Wales start.